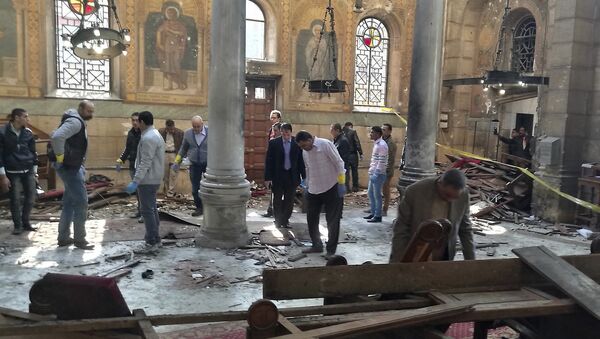 Speaking on CBC Extra news channel, Rady said the bomber targeted the right wing of the church, which is reserved for female worshippers. The majority of those killed during the Sunday prayer service were women and children, he said.

Updates #Breaking:20 were killed and 35 wounded in the attack that hits Coptic cathedral in #Cairo (Ministry of health spokesman 2 state TV)

A source in the country's Interior Ministry told RIA Novosti that the explosive material TNT was used to create the bomb.

​The news website Sada El-Balad cited a source in the investigation team as saying an unknown attacker threw a bomb inside the cathedral during a prayer service.

Watch: a video showing the explosion from a distance.

​A dozen of ambulances arrived at the scene of the explosion.

Casualties reported after an #explosion at the Coptic Orthodox cathedral in #Cairo. pic.twitter.com/TLTpM337QL

There has been no claim of responsibility yet.

Some pictures from today's explosion near Coptic Orthodox cathedral in #Cairo via @youm7 #Egypt pic.twitter.com/4I8e6IYUoK

Earlier reports cited Egypt's Ministry of Health saying that five people died in the explosion and ten more were injured.

Watch: a video recorded from the Cathedral right after the explosion.

Copts are a large ethnic and religious minority in Egypt, making up between 6 and 10 percent of the population.

Egypt’s Interior Ministry has stepped up security at places of worship across the country, a source in the ministry told RIA Novosti. There are 163 Coptic churches in Cairo alone.