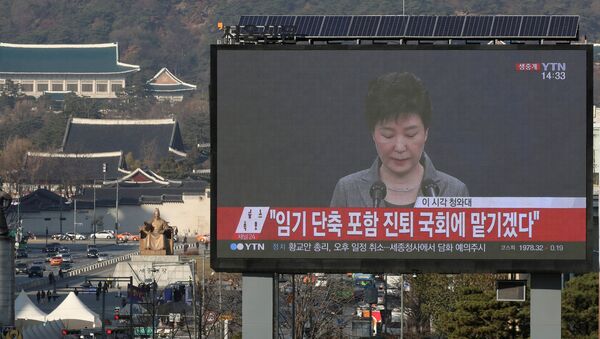 WASHINGTON (Sputnik) — The South Korean parliament voted earlier in the day to impeach Park over a political scandal in which she is accused of letting a friend act as a shadow adviser, effectively influencing presidential policies. Following the vote, Prime Minister Hwang Kyo-ahn assumed leadership of the government until the Constitutional Court decides whether to uphold Park’s impeachment – a process that could take as long as six months.

“Obviously, we’ve been following it closely,” Toner told reporters of developments in Seoul. “First and foremost, the United States continues to be a steadfast ally, friend and partner to the Republic of Korea. We certainly look forward to working with Prime Minister Hwang in his new capacity as acting president.”

Asia
South Korean President Accepts Parliament's Impeachment Vote
The spokesman added: “We expect and we believe that policy consistency and continuity across a range of fronts. We are going continue to meet all our alliance commitments especially with respect to defending against the threats we’ve seen emanating from North Korea.”

According to South Korea’s Yonhap news agency, National Defense Minister Han Min-koo ordered an increase in combat readiness of the country’s armed forces in response to the impeachment.

The scandal surrounding Park erupted in late October when media reported that the president had allowed Choi Soon-sil, a friend and adviser who held no official post, to edit her speeches, thereby giving her influence over policies. In addition, Choi was suspected of using her connection to power to extort money from South Korean companies for personal use.