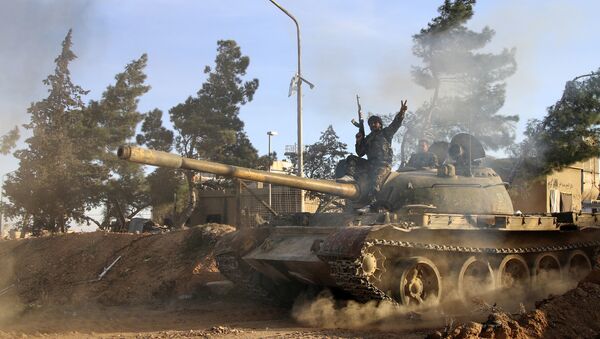 © AP Photo / Alexander Kots/Komsomolskaya Pravda
Subscribe
International
India
Africa
US President Barack Obama has relaxed restrictions on sending arms to groups supported by the United States in Syria in the hope of helping them recapture the city of Raqqa from Daesh before he leaves office, analysts told Sputnik.

US Opposed to MANPADS Flowing Into Syria Despite Easing Arms Restrictions
WASHINGTON (Sputnik) — On Thursday, Obama signed a determination waiving legal restrictions on US provision of defense articles to forces fighting against Daesh in Syria.

“Obama is trying to make… progress in taking out Daesh before his tenure in office soon ends,” Independent Institute Center for Peace and Freedom Director Ivan Eland said on Friday. “Raqqa is the Daesh capital in Syria and he would like to take it — or at least achieve major progress — before he leaves office.”

Eland said Obama hoped US —backed forces operating in Iraq would be able to recapture Mosul, too before he stepped down on January 20.

“Of course, even if Raqqa and Mosul are taken, during Obama's remaining tenure or Trump's, Daesh will still live on as a guerrilla movement and may still attempt to attack Western targets,” Eland said.

Eland said recapturing major cities from Daesh was always predicted, if indigenous troops could be supported with potent air power.

“But after the cities are retaken in Iraq and Syria, then the real fun begins fighting a counterinsurgency against the rebels throughout the countryside’s of both countries. The war will likely be a long one for the great powers,” Eland cautioned.

Retired US Army Colonel Doug Macgregor, a leading US military tactician, told Sputnik Obama’s move was likely also promoted by a desire to pull Daesh forces back to defend Raqqa to bring relief to the hard-pressed Iraqi regular army units struggling in front of Mosul.

“Is this an attempt to relieve pressure on Iraq's Shiite forces struggling to take Mosul? There is a lot of evidence that the fight for Mosul will drag on unless Daesh in Raqqa can be crushed,” Macgregor said.

Macgregor agreed that Obama had not given up hope of claiming credit for the fall of both Raqqa and Mosul before he left office.

“Is this a last ditch attempt by Obama to dislodge Daesh from its Capitol, as well as, Mosul? I suspect the answer to both questions is ‘Yes.’ A surge in air strikes and bomb tonnage will solve the mystery,” Macgregor said.

Kremlin spokesman Dmitry Peskov warned on Friday that man-portable air defense systems (MANPADS) could fall into the hands of terrorists in the wake of Obama’s decision to ease limits on military support in Syria.