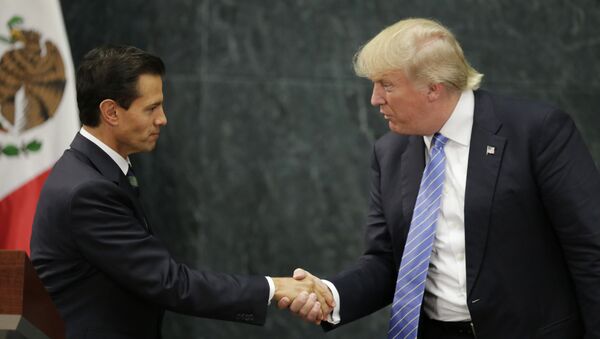 WASHINGTON (Sputnik) — According to the report, the risks are related to North American Free Trade Agreement (NAFTA) and illegal immigration from Mexico to the United States that both were on the Trump's presidential campaign agenda.

"The victory of Donald Trump has increased economic uncertainty and asset price volatility in Mexico as the President-elect has alluded to renegotiating or terminating NAFTA [North American Free Trade Agreement] with Mexico and tightening immigration controls," the report stated on Friday.

The report explained that US-Mexico relations have improved greatly since the implementation of NAFTA, which enabled integration between the two countries in several key industries, including agriculture, textiles and automobile manufacturing.

Despite President’s Promises, Mexicans Unsure of Their Economic Future
Trump’s criticism of NAFTA during the 2016 presidential campaign centered on American companies moving production facilities to Mexico and sacrificing US jobs, but then selling their products and services in the United States.

Trump transition's team adviser Anthony Scaramucci suggested earlier in December that the president-elect is planning to rescale NAFTA in a manner that renders the agreement fair.

Fitch added that Mexico’s debt burden has been growing steadily in recent years.