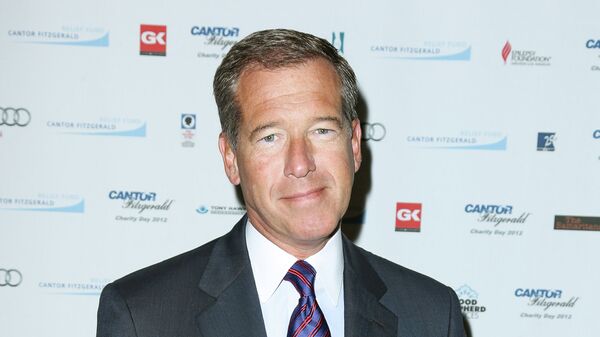 Internet Users Lash at Hillary Clinton for Comments About 'Fake News Epidemic'
Williams made global headlines last year after he lied by claiming that he had survived a 2003 helicopter attack in Iraq. He was suspended for six months, without pay, and upon his return was demoted from hosting “Nightly News” to becoming a late-night anchor for the MSNBC.

There were also questions about Williams’ coverage of Hurricane Katrina, after he claimed that he could see bodies floating in the water from his hotel in the French Quarter, an area that saw minimal flooding.

“Lately there’s been a lot of coverage in the real news about the growing and booming business of creating fake news,” Williams said on MSNBC.

Williams then began throwing stones from inside his glass house, by accusing the Donald Trump transition team of spreading “fake news,” following the election.

“Fake news played a role in this election and continues to find a wide audience,” Williams warned.

He then directed his newfound, and apparently hypocritical, concern toward Trump’s incoming national security adviser, Lt. Gen. Michael Flynn, and his son.

“Flynn’s son was fired by the Trump transition team today for passing on fake news stories via Twitter,” Williams said. “But his dad, the retired Army three-star general, has passed on some gems himself.”

“Here are a few: [Hillary] Clinton is involved with child sex-trafficking and has secretly waged war on the Catholic Church, as well as charges that the president is a jihadi who laundered money for Muslim terrorists,” Williams added.

However, the story Flynn shared was not false, and was even defended by the Washington Post, one of the most prominent voices against “fake news.” The Post noted that the story the soon-to-be national security advisor tweeted about regarded Bill Clinton’s connections to pedophile Jeffrey Epstein, and admitted that there is some truth to it.

“After leaving office, Bill Clinton was occasionally a passenger on aircraft owned by convicted pedophile Jeffrey Epstein,” the Post quoted their own fact-checker saying.

So, once again, Williams, while wagging his discredited finger, is simultaneously spreading “fake news” — it apparently is a “booming business,” after all.