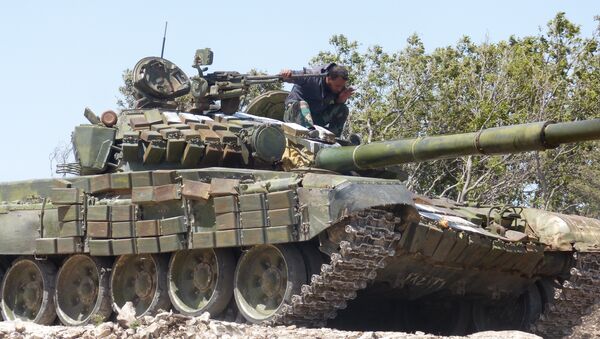 "Combat operations by the Syrian army in east Aleppo have been suspended because the largest operation of evacuation of civilians from east Aleppo is being carried out. A column of about 8 thousand people, it's a tremendous operation," Lavrov said.

The Russian foreign minister said that Western states have not proposed any concrete steps to solve the humanitarian crisis in Aleppo.

Lavrov said that Russia is aimed to "fight terrorists in Syria till the end" in accordance to a UN Security Council resolution.

"Our strategy is very simple as it is based on a UNSC resolution which states that terrorists should be relentlessly fought until their full elimination."

Militants Who Refuse to Leave Aleppo Will Be Eliminated - Lavrov
He also said that the UNSC resolution stipulates solving humanitarian issues and launching a political process in the country.

He said that the United States does not target al-Nusra Front terrorist group.

"As for al-Nusra Front, the US doesn't 'touch' it at all, but during all our talks they [US authorities] strived to formulate agreements in such a way to exclude al-Nusra Front as a target for strikes," Lavrov said.

Russian Foreign Minister Says US is Not Fighting Al-Nusra in Syria
"We cannot accept that as al-Nusra Front is recognized by the UN, the US, Russia and other countries as a terrorist organization," he emphasized.

Lavrov also said that Russian and US experts will discuss militants' pullout from Aleppo during a meeting in Geneva on December 10.

The Russian top diplomat called on UN Special Envoy for Syria Staffan De Mistura to stop "sabotaging" the Syrian political process. He also called for a new round of the Syrian peace talks.