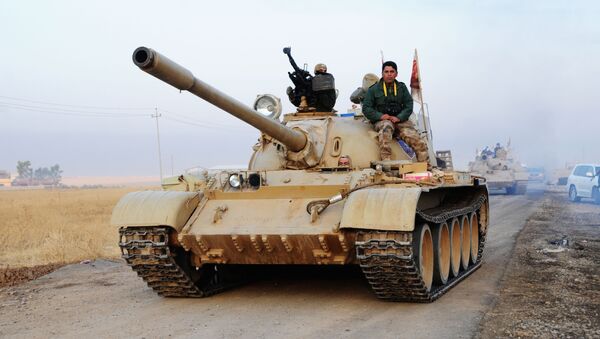 © Sputnik / Hikmet Durgun
Subscribe
Kurdish Peshmerga forces have no plans to move beyond their present positions in Mosul and are counting on Iraqi Security Forces to finish the job of liberating Iraq’s second largest city from the Islamic State, Kurdistan Regional Security Council Chancellor Masrour Barzani said at the Woodrow Wilson International Center for Scholars on Thursday.

WASHINGTON (Sputnik) — Barzani stated there is no plan for the Peshmergas to go beyond where they are at the moment.

"But if the circumstances change, this is an open dialogue between the leadership of KRG [Kurdistan Regional Government] and Baghdad and the American-led coalition to see what would be the alternative."

Barzani declined to predict how long it would take to free the city, but noted that Islamic State fighters are using increasingly sophisticated and deadly tactics.

"ISIS [Islamic State] has been very creative in the way that they are fighting the Iraqi Security Forces," Barzani explained. "They have weaponized drones and they have the DBIEDS. This is the drone-borne improvised explosive devices."

Biden, Iraqi Kurdistan's Barzani Meet to Discuss Anti-Daesh Operation - Envoy
Barzani also noted that Daesh networks of tunnels extend beyond the city to the first lines of defense, where Kurdish Peshmerga forces have reached the limit of Kurdish territory on the eastern side of Mosul.

Fighting on the western bank of the Tigris River, where the Iraqi Security Forces are engaged, is expected to be much harder because there are smaller alleys and more Islamic State sympathizers, Barzani explained. The Tigris divides Mosul roughly in half.

"I have no doubt they [Islamic State] will eventually be defeated," he said. "It is just a matter of time."

The Kurdistan Regional Government in Northern Iraq operates military forces known as Peshmerga, which are separate from — and more effective than — Iraqi Security Forces controlled by Baghdad.