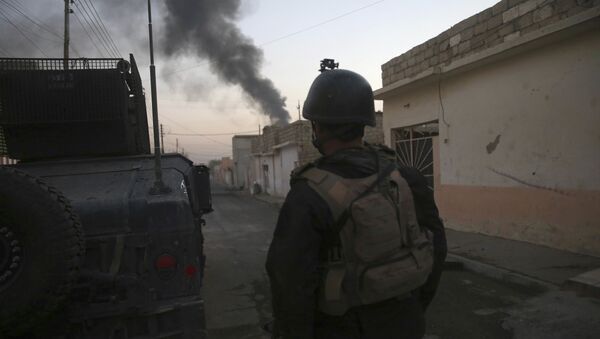 © AP Photo / Hussein Malla
Subscribe
Iraqi ground troops were forced to withdraw from a Mosul hospital believed to have been used as a base for Daesh militants. After days of exchanging fire with the jihadists, Iraqi forces were able to set up a base for their tanks, according to residents.

The Salam hospital, located in the Al-Wahda neighborhood and situated less than mile from the Tigris River, which divides eastern and western Mosul, was seized by Iraqi soldiers on Tuesday. After a month of battle the Iraqi Army advanced in the area as part of a block-by-block effort to retake nearby communities.

According to a statement by US-led coalition forces, the Iraqis were forced to retreat Wednesday after taking “heavy enemy fire” and suffering six car bomb attacks. A building within the hospital complex that Daesh was using to fire rocket-propelled grenades and machine guns was also struck by coalition warplanes, at Baghdad’s request.

The Iraqi troops are leading a coalition of some 100,000 Kurdish peshmerga fighters, federal police, Shi'ite Popular Mobilization forces, and military personnel who are together fighting Daesh, which has used Mosul as a stronghold since 2014.

Following Baghdad’s advancement into Al-Wahda, their Ninth Armoured division was left exposed. One unnamed officer said, "When we advanced first into Wahda, Daesh (Islamic State) showed little resistance and we thought they had fled…But once we took over the hospital, the gates of hell opened wide."

He added that, "They started to appear and attack from every corner, every street and every house near the hospital," and suggested that the militants may have entered the hospital using a network of tunnels.

A nurse at Salam said Daesh guards removed members who had been treated there, after the Iraqi Army entered the hospital. A person living nearby described the encounter as "very violent warfare," saying that, "they used all sorts of weapons, it's not traditional war. There were explosives, suicide attackers, mortar barrages and planes, everything."

Iraqi troops came under attack by suicide bombers and car bombs while fighting off terrorists at the hospital, with one officer reporting dozens of people killed and 20 armored vehicles damaged or destroyed after one suicide bomber detonated himself.

On Wednesday dozens of civilians were killed in airstrikes near the Syrian border in Qa’im, a town under Daesh control in the mostly-Sunni area of Anbar.