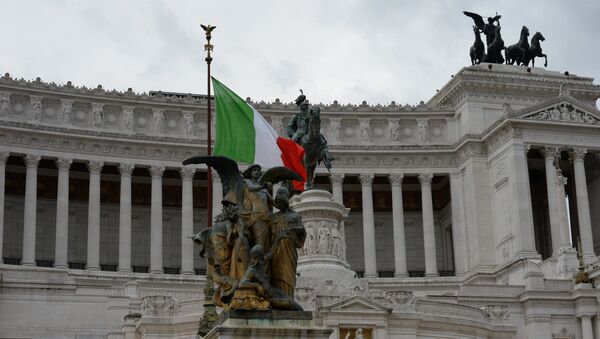 © Sputnik / Natalia Seliverstova
/
Go to the mediabank
Subscribe
International
India
Africa
The European Central Bank’s (ECB) decision on stimulus might trigger or prevent an Itexit scenario despite the domestic political and financial turmoil in the country; however, should the regulator announce a compromise decision, uncertainty is poised to linger for months into the next year.

Kristian Rouz – After Italian Prime Minister Matteo Renzi announced his resignation amid a political crisis, allegations of Italy leaving the euro have been rife. Meanwhile, the European Central Bank’s (ECB) commitment to buying Italian bonds and other assets in order to prevent an Itexit scenario might be in jeopardy should the ECB decide to not extend its stimulus package beyond its expiration deadline in March 2017.

Bonds sank further, and yields on fixed income advanced amidst the concern the ECB might opt to not prolong its bond buyout programme beyond March 2017. Stimulus extension has been already priced into the market following the filed Italian referendum on constitutional reform earlier this month.

Italian President Accepts Prime Minister Renzi's Resignation
The ECB is currently buying some 80 bln euros worth of assets, primarily, fixed income, on a monthly basis, in order to provide a stable inflow of liquidity into the Eurozone economy.

However, the amount of assets eligible for purchase, has declined to near-zero recently, making an extension of stimulus hardly sensible. Yet, should the ECB fail to loosen its monetary stance on the post-referendum Italy, the nation might leave the euro on the wave of populism in domestic politics, spearheaded by the Five Star Movement, a local rendition of Donald Trump and Brexiteers, who have both rocked global markets earlier this year.

ECB policymakers, including President Mario Draghi, have repeatedly stressed that Eurozone monetary policies are bound to return to normality eventually. As the decision on stimulus extension by another six months looms on Wednesday, fixed income markets are in a downward spiral of feverish selling: Frankfurt might opt to lose Italy rather than risk destabilising the euro area economy.

“The market is just in general a little bit nervous whether Draghi will actually get this extension of QE through and whether it will be the same amount as before,” Allan von Mehren of Copenhagen-based Danske Bank A/S. “So we see a bit of anxiety ahead of the decision but it has been quite volatile. The liquidity right now is not great. A lot of people are sidelined, so I don’t think it takes big trades to move the market.”

Fitch: Bad Loans, Political Crisis Weigh on Italian Banking Sector
10-year Italian governmental bond yields rose to 1.95pc, indicating sinking value of the bond, and the euro gained 0.3pc to $1.0790 on the anticipation of tighter monetary environment in the Eurozone. Even though Italy might leave the euro next year, the markets see the single currency as more stable based off the ECB’s policies backed by the powerhouse of the German economy, and the financial turbulence in Italy poses barely any concern at all.

The ECB, as reflected in the recent Draghi comments, is watching euro area inflation as key determinant of its policy. Albeit the mounting political risks in Italy and its banking sector turmoil pose certain risks to the euro’s stability, the single market might sacrifice the membership of one of its member states in order to stave off an across-the-board depreciation of European assets inevitably entailing the decision to extend stimulus by another six months.

“If I were Mr. Draghi, I would try to be vaguely non-committal on details,” Kit Juckes of the London branch of Societe Generale SA said. “It’s a balancing trick at this particular point and in the next few months to prepare the market for tapering without adding to the degree of uncertainty in European currency and bond markets.”

Along with announcing its policy decision on Wednesday, the ECB updates its outlook on growth and inflation. Draghi, however, might deliver a decision on stimulus falling short of expectations, but providing hope for Itexit being averted, for instance, extending the stimulus by three months instead of six.