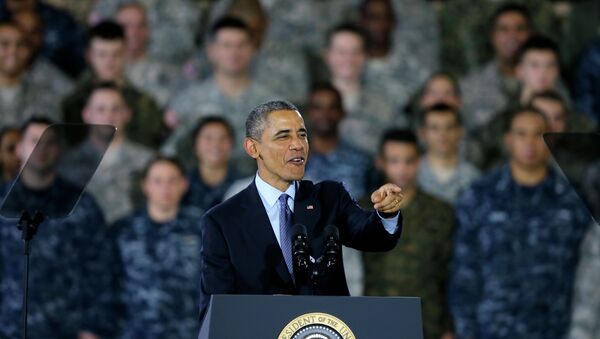 "President Obama has involved the United States in four ongoing wars as he leaves office," he said, referring to the conflicts in Iraq, Syria, Yemen and Libya. The analyst then mentioned that Afghanistan should also be on that list. "These are actual conflicts that the US continues to be involved in not to mention the 'light' stuff they are doing in Somalia and the like. … They all show no signs of abating."

This comes in sharp contrast to Obama's campaign promises.

Trump Pledges to End US Regime Change Policies Around the World
The outgoing president "came into office with two wars winding down and saying he was going to get out of them," Copley added. "I think [Obama] is interested in passing the buck for some of this to the next administration and trying to keep the next administration [involved in] conflicts which are on his personal agenda."

Copley, president of the International Strategic Studies Association, expects the Trump team to be more reserved when it comes to foreign policy.

"In the Trump administration you will see a far more cautious approach to interventionism around the world than what we have seen under the Obama administration. President-elect Trump understands that his overriding goal is to rebuild the US economy and start rebuilding US prestige internationally. That means not getting engaged in situations which are ongoing processes without results," he said.

Russia Shouldn't Expect 'Red Carpet Treatment' From Trump's Team Thanks to Obama
"We saw that with the recent very careful maneuver which he conducted with China," the analyst said, referring to a telephone conversation between Donald Trump and Taiwan's President Tsai Ing-wen. It was a major departure from Washington's policy on China and Taiwan, which infuriated Beijing.

Copley maintained that Trump "will spend major resources on rebuilding the US economy because without that nothing is possible." The United States, according to the analyst, is "in danger" of running out of steam if it does not revive its economy, but Trump appears to understand this and has several solutions to this problem.