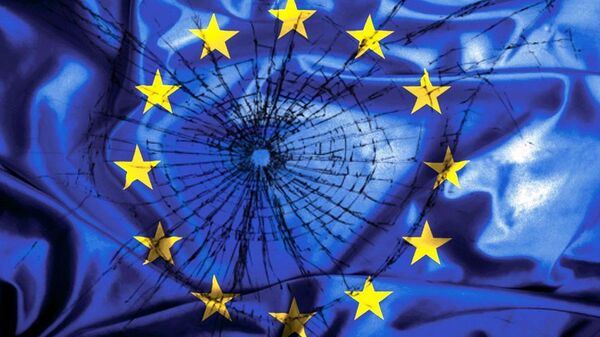 © Sputnik / Collage
Subscribe
International
India
Africa
A fresh row is opening up in the European Parliament, with splits between the major parties threatening to bust open the 'grand coalition' that has helped pass significant legislation and manage various crises over the past few years.

Reports have suggested that a split has opened up between the European Parliament's center-left Progressive Alliance of Socialists and Democrats (S&D) and the center-right European People's Party (EPP) group, with both parties looking to fill the European Parliament presidency when current leader, the S&D's Martin Schulz, finishes his current term in January.

​Although the two groups are natural opponents, they have worked together with the centrist Alliance of Liberals and Democrats (ALDE) in recent years to draw a consensus on many major European issues amid ongoing uncertainty and challenges across the continent.

This cooperation between the so-called 'grand coalition' has allowed EU leaders to pass significant pieces of legislation over the past few years and is considered to be key to maintaining political stability amid severe disillusionment with the political establishment in Europe.

However, reports have suggested that S&D leader Gianni Pittella would skip planned meetings with EPP chief Manfred Weber as part of an effort to declare that the unofficial coalition was finished.

"We want to find a broad support among all pro-European groups to have @Europarl_EN president who can guarantee our parliamentary democracy" pic.twitter.com/0o62vQv1ga

Pittella, who is expected to re-elected as the chairman of the Socialist bloc, has also announced plans to succeed Schulz as the parliament's president, pledging to end EU austerity and pursue "more sustainable development."

Euractiv: "Talks begin for left-wing 'grand coalition' in EU Parliament". I must say: can't be so "grand", as they haven't even talked 2 us.

​The Italian MEP said he was willing to work with all political groups "except right-wing extremists" in order to secure support for his bid, however the apparent breaking up of the 'grand coalition' has left some EPP members scratching their heads.

There are fears that breakdown in cooperation between the two largest groups in the European parliament could play into the hands of populist groups, who could exploit the divides between major parties and use the uncertainty to their own advantage.

​"To limit the influence of extremists in the European parliament there is no alternative to cooperation between the EPP and the S&D groups," EPP chief Manfred Weber told POLITICO.

"We are ready to continue this cooperation. It worked very well during the vote on the EU budget… for example."