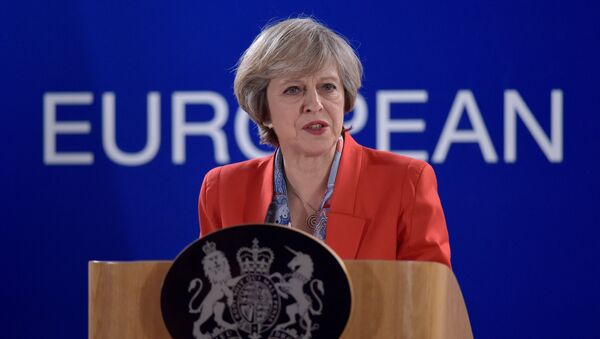 © REUTERS / Eric Vidal
Subscribe
The British approach to the negotiations on the withdrawal from the European Union should as much as possible meet the interests of the United Kingdom, UK Prime Minister Theresa May said Tuesday.

The Great British Brexit Debate Enters Its Second Day at the Supreme Court
MOSCOW (Sputnik) — On June 23, the majority of the UK voters chose to leave the European Union. The UK government is reportedly eyeing at least two post-Brexit options, dubbed soft and hard Brexit, which seek to balance immigration controls with market access.

"I’m interested in all these terms that have been identified – hard Brexit, soft Brexit, black Brexit, white Brexit, grey Brexit – and actually what we should be looking for is a red, white and blue Brexit," May told reporters, as quoted by the Guardian newspaper, meaning that the deal should secure the interests of the United Kingdom above all.

May added that her team would work on the best conditions for the United Kingdom, but did not intend to disclose all the details of the deal.

"I’m going to keep some cards close to my chest, I’m sure everybody would realise that in a negotiation you don’t give everything away. It’s important that we are able to achieve the right deal for the UK," May said.