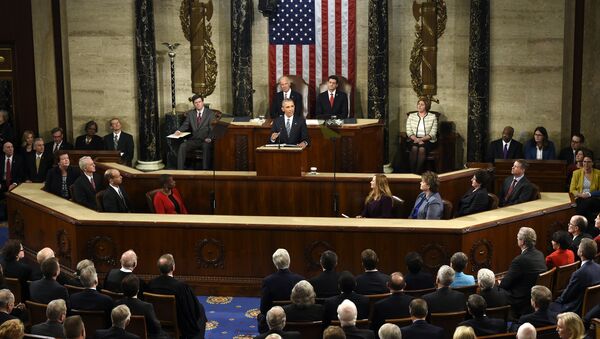 The US Electoral Collage needs to be abolished because the system for electing a president violates the principle of one-person - one-vote and therefore threatens the future of democracy in the United States, a panel of Democratic Party members of the US House of Representatives warned.

WASHINGTON (Sputnik) — The panel stressed that American democracy cannot be sustained by having Electoral Collag in place.

"If you look 50 years in advance, where the bigger states are getting bigger and the little states are losing population, I don’t think we can sustain our American democracy by having the majority ruled by the minority," US Congresswoman Zoe Lofgren from the state of Clifornia said on Tuesday.

Support for US Electoral College Rises Sharply Following Trump Victory
US Congressman David Cicilline from the state of Rhode Island said that a basic principle of democracy is that no person’s vote counts more than another person’s vote.

"The Electoral College distorts that in so many ways," Cicilline stated.

It is time to get to work to change this system so that the people’s will is achieved, said US Congressman Hank Johnson from the state of Georgia.

The Electoral College, he noted, reflects the federal structure of the US government, in which smaller states have influence disproportionate to their populations.

Eliminating the Electoral College in itself would do nothing to alter the system unless the state-by-state, winner-takes-all system of awarding electoral votes is also scrapped.

Five times in US history the nation has elected a president who did not win the popular vote, including the 2000 election of President George W. Bush and the recent election of Trump.