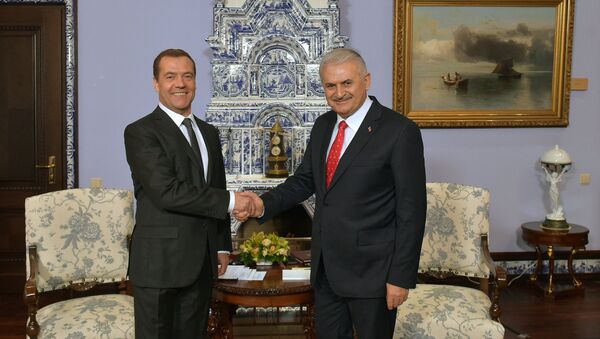 Yildirim said during talks with Russian Prime Minister Dmitry Medvedev that Russia and Turkey play a key role in the fight against terrorism.

"Turkey and Russia are of great importance… not only in terms of the development of relations between the two countries, but also in the fight against terrorism and ensuring peace," he said.

He said that after tensions in bilateral relations, Ankara and Moscow will develop strategic ties between the countries.

"The relations between the two countries [Turkey and Russia] have gone through a difficult time over the last year. And after this negative experience, we plan to develop our relations at a strategic level," he said.

Russian-Turkish relations have deteriorated following the downing of a Russian Su-24 bomber over Syria by the Turkish Air Force. At the beginning of 2016, Russia has imposed a number of restrictive measures, including a ban on charter flights, food and flowers imports.

000000
Popular comments
what a moron; his garbage country is one of the main sponsors of terrorism.
Tornado_Doom
6 December 2016, 14:05 GMT1
000000
Yes yes, whatever. just keep these notorious jihadist backstabbers under close supervision.