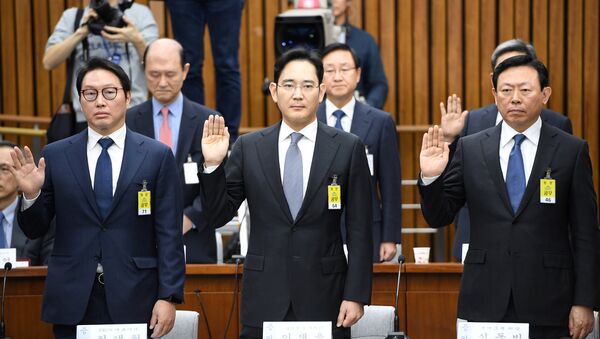 One of the most important questions to answer is whether businessmen received support from country’s officials in exchange for donations to Choi’s funds.

Political scandal around the president broke out in late October when media reported that Park allowed Choi, her friend and "shadow adviser," who held no official post, to edit her speeches thus letting her influence the country's policy. Moreover, Choi was suspected of pressuring South Korean big corporations and extorting money from them for her noncommercial funds. A total of $70 million was transferred to the bank accounts of these funds.

Biggest demonstration in S.Korea. 2.32 mln protesters across the country call for the ouster of President Park Geun-hye pic.twitter.com/imw9T8ujOz

​Choi was officially charged on November 20 and the prosecution said that the president was also involved in the scandal. As a result, thousands of people took to the streets demanding the president's resignation.

Gwanghwamun station is changed to "President Park resignation station," ahead of the mass rally in Seoul against Park Geun-hye pic.twitter.com/lbvYjngyYC

​On Friday, South Korean Parliament will vote on Park’s impeachment. A two-thirds majority in the 300-seat legislature is needed for the impeachment process to start.