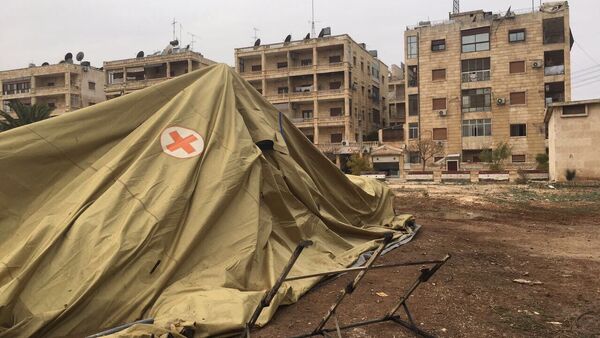 The International Committee of the Red Cross is taking Monday’s attack on the Russian hospital in Aleppo extremely seriously and is going to discuss such incidents directly on the ground with those who are responsible for them, Head of ICRC Regional Delegation in Moscow Magne Barth told Sputnik on Tuesday.

Terrorists Used Precision Fire on Hospital in Aleppo, They Had Exact Coordinates
MOSCOW (Sputnik) — On Monday, a Russian mobile military hospital in Aleppo was shelled by Syrian rebels, killing two military medics and wounding another, according to the Russian Defense Ministry.

"We take these incidents extremely seriously and follow them up directly with whoever is responsible, as part of our confidential dialogue with all sides," Barth said.

"Attacking hospitals is unacceptable. Attacking medical personnel and sick and wounded is forbidden under international humanitarian law. Sadly, this is not the first time that hospitals have come under attack in Syria, and this is not the first time that medical personnel's need for protection has been violated. It again shows that there is no respect for the special status of the medical mission, whether they are civilian or run by the military or non-state armed groups. These kinds of attacks should not be happening, regardless of who is responsible," he added.

Moscow believes that the attack on a Russian military hospital in Aleppo was a planned campaign, Russian Foreign Minister Sergei Lavrov said earlier on Tuesday.