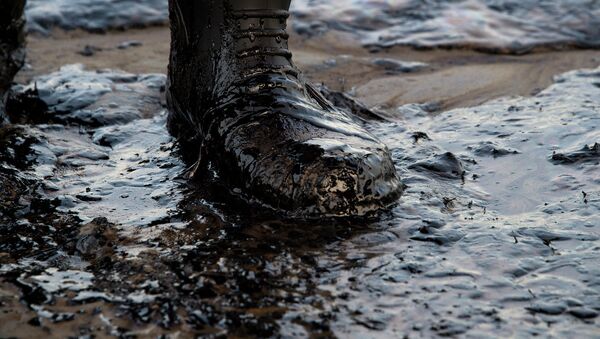 Oil pipeline spills in the US state of North Dakota have resulted in $40 million in property damage for the past two decades, according to federal government data cited by the Center for Biological Diversity in a release.

WASHINGTON, December 7 (Sputnik) – Pipelines in the US state of North Dakota have leaked crude oil and other hazardous liquids at least 85 times since 1996, an average of four spills a year.

“These 85 spills — an average of four a year — caused more than $40 million in property damage, according to the data compiled from the US Department of Transportation’s Pipeline and Hazardous Materials Safety Administration,” the Tuesday release from the environmental advocacy group stated.

The release follows last week’s decision by the US Army Corps of Engineers to halt construction of the $3.7 billion Dakota Access Pipeline because of concerns over the project’s environmental impact. The agency elected not to issue a permit for drilling beneath Lake Oahe, a reservoir that serves as a major source for water for the Standing Rock Sioux tribe of Native Americans.

White House Denies Involvement in Talks Over Dakota Access Pipeline
On Monday, Jason Miller, a spokesman for President-elect Donald Trump, told reporters that the incoming leader – an expressed supporter of the pipeline – will wait until he is in office to review the Army Corps’ decision.

In its release, the Center for Biological Diversity claimed that Energy Transfer Partners, the Texas-based company behind the Dakota Access Pipeline, has been responsible for 29 pipeline safety incidents since 2006, resulting in nearly 10,000 barrels of hazardous liquids spilled.

The nearly 1,200-mile pipeline is designed to transport light crude oil drilled from North Dakota’s Bakken shale formation through the states of South Dakota and Iowa before terminating in Illinois to the southeast.

As shown in numerous online videos, protests against the project by members of the Standing Rock Sioux have been marked by violence inflicted by state and local law enforcement officers, who have used dogs, water cannons and tear gas against largely peaceful demonstrators.