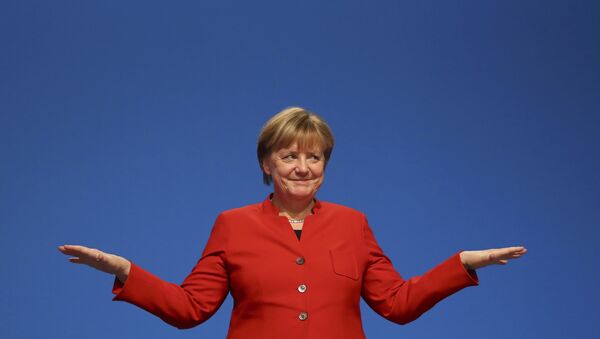 © REUTERS / Kai Pfaffenbach
Subscribe
German Chancellor Angela Merkel has outlined her plans for a fourth term in power ahead of next year's federal election, with the chancellor predicting the 2017 vote will be "difficult like no other," amid ongoing concerns over the government's immigration policy and a rise in populism.

Merkel addressed her Christian Democratic Union (CDU) colleagues at a party conference in the western city of Essen, the city where she first win the party leadership 16 years ago.

​The annual conference marks a significant turnaround in support and fortunes for Merkel, who just a few months ago was facing the prospect of having the CDU's Bavarian sister party, the CSU, run a separate campaign amid anger over the government's refusal to back down on its controversial open-door refugee policy, which saw around one million refugees come to Germany in 2015.

Merkel: 'We Need to Re-Think Our Approach'

However, while Merkel is still tipped to get the nod to remain in charge of the CDU, numerous colleagues have said they will use the party conference as an opportunity to press the chancellor on how she expects to address certain issues, including the conservative party's loss of support to the far-right, anti-Islamic Alternative fur Deutschland (AfD).

Thuringia regional government member Hans Pistner told broadcaster MDR there was some concern about what the chancellor will actually reveal at the conference, "because Angela Merkel said she will stand again, without saying how she will change her policies in the future."

Angela #Merkel opens #CDU party conference. As she is due to be re-elected as party leader only question: how far below last time's 96,7% pic.twitter.com/3QhPfqNwYy

​With Britain set to leave the EU, the election of Donald Trump in the US, tensions between NATO and Russia and the rise of populism in Europe, the CDU will debate a main resolution titled: "Orientation in difficult times — for a successful Germany and Europe."

Speaking at the conference, Merkel said recent events had forced Germany to rethink its relationship with key players around the world, including NATO and Russia.

Merkel: Germany should reconsider its relations with Russia and NATO

​"We are dealing with the situation in the world, especially in the light of the US presidential elections, in which the approaches in the world must be re-formulated, regarding above all such important things as NATO and relations with Russia."

Fight Against the Far-Right

While recent polls have shown support for Merkel's CDU and sister Bavarian party, the CSU, has risen to 37 percent — 15 points ahead of the nearest opponents, the center-left junior coalition SPD — there are concerns that the far-right populism that has gained support in Europe and the US could also be seen in Germany.

The far-right AfD party has made significant gains in recent regional elections on the back of strong opposition to Merkel's ‘open-door' immigration policy, with critics often personally blaming the chancellor for the situation.

Angela Merkel appears to be implementing some sort of damage limitation following the immigration fiasco. A case of too little too late?!

​This has led to pressure on Merkel to toughen the party's stance on the migration crisis, with CDU deputy chairman Thomas Strobl among those calling for changes that would make it easier to deport asylum seekers whose applications have been rejected.

"We can't just put a notice for departure in people's hands and then not follow through with the law," he said, adding "that would substantially erode trust in the rule of law".

Is Angela Merkel *sure* she wants to court the far right ahead of next year's elections? Anti-establishment doesn't always mean far-right.

​Merkel seemed to heed the warnings, telling the conference that it was her "political goal" to ensure the migration crisis of the summer of 2015, when thousands of migrants and asylum seekers arrived in Germany in a short period of time, does not happen again.

"The situation with the arrival of refugees in Germany, as it was in the summer of 2015, cannot, must not and will not be repeated," Merkel said.