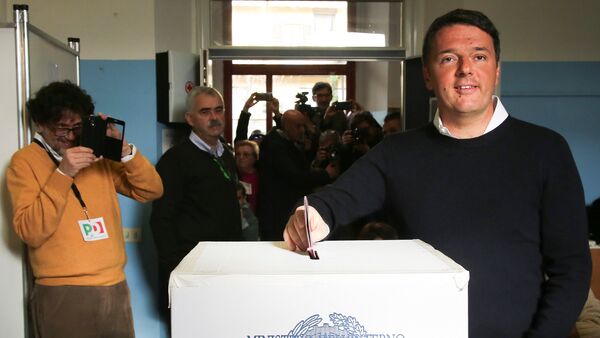 "The population has lost its confidence in the establishment, the mainstream parties, the corporate media and both the financial and cultural elite because the establishment does not represent them anymore," Claes said.

According to Claes, the referendum’s outcome expresses change in Western political reality in a vein similar to the Dutch referendum, which rejected the Association Agreement between the EU and Ukraine, Brexit and the election of Donald Trump in the United States.

"Representative democracy requires, obviously, that those in parliament represent their voters. When they fail to do that, or worse, refuse to do that — they lose their legitimacy," Claes added.

On Monday, the opposition Five Star Movement (M5S) party called for early parliamentary elections in the wake of the failed constitutional referendum and Renzi's resignation. This initiative was supported Lega Nord, which announced readiness for the snap elections. Earlier in the day, Italian Interior Minister Angelino Alfano said that the country could hold snap parliamentary election as early as February 2017.