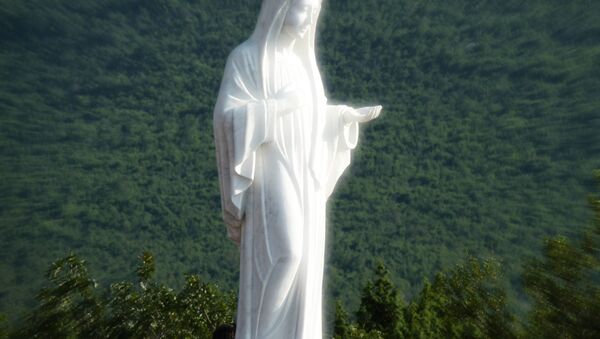 © Flickr / Sean MacEntee
Subscribe
A French court has ruled that a statue of the Virgin Mary violates the country’s ban of public displays of religious symbols. The statue, located in the small town of Publier, must now be removed from public property.

In 2011, Publier, a small town by Lake Geneva with about 6,000 residents, commissioned a marble statue of the Virgin Mary to overlook the water,  attracting local controversy as it was paid for with municipal funds but there was no debate in the town council over its construction. The controversy eventually became a court case, one in which the court ruled against the legality of the statue’s construction.

Right-wing French politicians criticized the court’s decision as tyrannical and against freedom of expression. Gaston Lacroix, the mayor of Publier, stated that he would attempt to relocate the statue to private property.

France, one of the most secular nations in the world, takes the separation of church and state (a policy called laïcité) very seriously. A 1905 French law bans the display of religious symbols on publicly-owned lands and the 1958 French constitution explicitly labels France as a secular nation.

This extends to private citizens expressing their faith via clothing in public institutions. The Independent reports that a 2004 French law bans "ostentatious" displays of faith such as kippas, large crosses, and burqas in public schools. A 2011 law also bans any article of clothing which covers the face in public places, including burqas and niqabs. Several countries in Europe and Africa have followed France’s example and passed similar laws, including Switzerland, Belgium, Chad, and parts of Spain.

There was also a controversial attempt to ban the "burkini," a swimsuit that covers the entire body, but French and international courts ruled against the ban. Critics have labeled these policies anti-religious, Islamophobic, and anti-personal liberty.

French religious policies have become increasingly controversial in recent years. In 2008, Christianity Today reported that then-President of France Nicholas Sarkozy had made numerous pro-Christian comments in public. Sarkozy claimed that France has deeply Christian roots and that it is wrong to force faith out of the public sphere, labeling the 1905 law "negative laïcité."

Current President Francois Hollande (an avowed atheist) is a firm supporter of French secularism. La Croix reports that Hollande called secularism a "pillar of the republican pact" and Europe 1 reported that he wished to have the policy of laïcité added to the French Constitution.

Publier has three months to remove the Virgin Mary statue. Following that window of time, they will be forced to pay a penalty fee of 100 euros for each day the statue remains on public land in France.

000000
Popular comments
What is all the hullabaloo about? France has been in the gutters ever since Voletaire and Rousseau when it comes to Christianity.
marcanhalt
6 December 2016, 02:49 GMT
000000
That's because they are catering to Muslims.