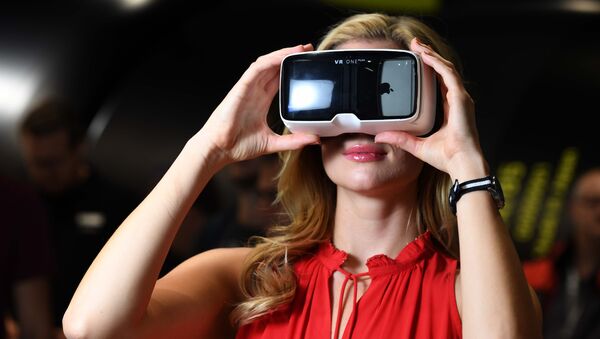 © AFP 2022 / PATRIK STOLLARZ
Subscribe
Virtual reality may help amputees relieve phantom limb pain, which is a serious chronic condition affecting patients who have lost a limb, a new study from the Chalmers University of Technology in Gothenburg, Sweden, has shown.

According to the study, published in the medical journal The Lancet, phantom limb pain experienced by the patients was reduced by almost 50 percent in regards to duration, frequency and intensity.

"This is all the more encouraging considering the fact that these patients had previously tried up to four different treatments without success," study head Max Ortiz Catalan from the Chalmers University said. "We also saw the pain gradually subside until the final treatment session. That suggests you can potentially achieve even better results with more sessions as the pain reduction didn't plateau," he added.

Out of Your Mind: Japanese Students Experience Dementia via VR
In the method, dubbed "phantom motor execution," muscle signals from the amputated limb are used to control augmented and virtual environments. Electric signals in the muscles are picked up by electrodes on the skin. Artificial intelligence algorithms then translate the signals into movements of a virtual arm in real-time.

The VR therapy thus allows the patient to 'move' the lost arm in order to perform virtual tasks like driving a virtual car. The patients see themselves live on the screen with a virtual arm where their real arm used to be and have full control over it. According to the Chalmers University press-release, this method helps patients re-activate brain areas which used to control the limb before it was amputated.

People who have lost an arm or a leg often suffer from the phantom limb sensation — which manifests through pain where the limb used to be, for years after the amputation. Approximately 60 to 80 percent of amputees experience phantom sensations in their missing limbs, which greatly impacts their quality of life and mental health. Phantom pain occurs when nerve endings at the amputation site continue to send pain signals to the brain, which falsely believes the limb is still there.