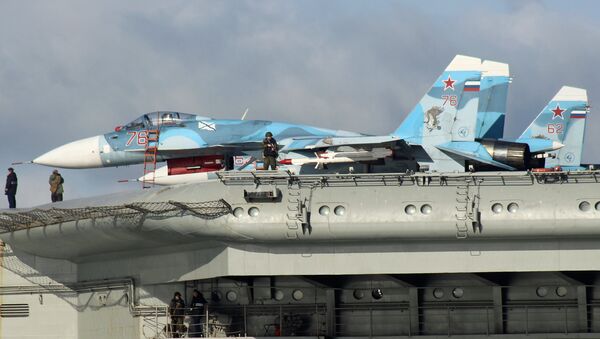 A Russian Su-33 fighter jet has skidded off the Admiral Kuznetsov aircraft carrier in the Mediterranean while landing but the pilot ejected and his life is not in danger, the Russian Defense Ministry said on Monday.

"While landing after completing a combat task in the Syrian sky, a Su-33 fighter jet skidded off the dock because the cable of arresting device broke. The pilot ejected and was immediately brought aboard the Admiral Kuznetsov heavy aircraft carrier by rescuers. His life is not in danger," the ministry said.

The naval group's aviation continues its mission as planned, it added:

"The ship-based aviation continues its flights in accordance with its tasks."

Russian MIG-29 Crashes in Med After Takeoff From Aircraft Carrier
On October 15, Russia's Northern Fleet’s press service said that a group of warships headed by the Admiral Kuznetsov accompanied by the Pyotr Veliky battle cruiser, the Severomorsk and Vice-Admiral Kulakov anti-submarine destroyer and support vessels had been sent to the Mediterranean to hold drills and strengthen capabilities.