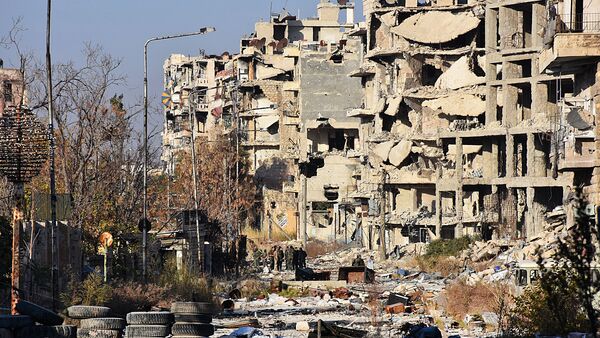 Russian Foreign Minister Sergei Lavrov slammed the initiative to introduce a United Nations Security Council resolution on Aleppo as a provocation aiming at undermining Moscow-Washington talks on the issue.

"Considering the way previous pauses passed, we have no doubts the 10-day pause for militants will be used by the extremists to regroup and recover strength and will therefore impede the liberation of Eastern Aleppo," the minister said.

Syrian Army Displeases the West by Liberating Aleppo
Lavrov noted that "the draft resolution is essentially a provocation aimed at derailing Russia-US efforts".

Experts from Russia and the United States will begin their work Aleppo on Monday, the top diplomat said following talks with Philippine Foreign Affairs Secretary Perfecto Yasay, Jr. They will raise the issue of militants' withdrawal from Eastern Aleppo.

"As we announced last Saturday, December 3, the work of Russian and American experts on the problem of Eastern Aleppo is starting now in Geneva on a proposal from the United States," Lavrov said.

"During Russian-American consultations, specific routes and timeframes for militants to leave Eastern Aleppo will be agreed," he said.

The ceasefire regime in Aleppo will take effect after the routes and dates of militants' withdrawal from the Syrian city are agreed, Lavrov said.

"As soon as such routes and dates are agreed, the ceasefire regime will enter into force in order to start evacuation of those combat groups," he said.

He expressed hope that Russian-US cooperation on the issues would be fruitful, and the city would be cleared of militants.

Russia will treat militants who refuse to leave eastern Aleppo as terrorists, and will support the efforts of the Syrian government to fight them, the minister said.

"We believe that Americans, when they put forward their initiative on the necessity for all militants to leave Eastern Aleppo, were aware what steps it will require from them and their allies who influence militants that settled in Eastern Aleppo," the Russian foreign minister said.

"We were ready to meet in Geneva even today, but Americans asked to postpone the consultations by a day or a day and a half, they are likely to start tomorrow evening or Wednesday morning," he said.

Lavrov: Creation of 'Army of Aleppo' Could Just Be Rebranding of al-Nusra Front
Over recent months, Aleppo became major battleground in Syria, engaging government forces, jihadists, and numerous opposition groups. Eastern Aleppo is currently encircled by government troops, and the fighting has affected thousands of civilians still trapped in the city.