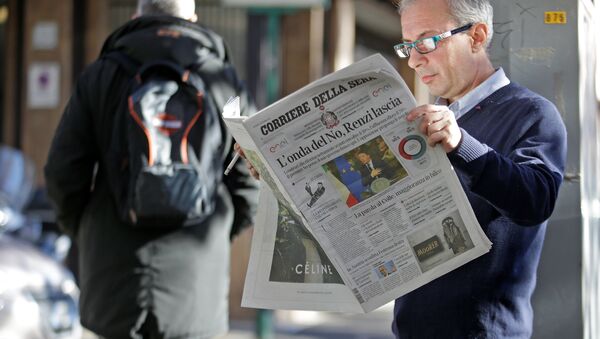 © REUTERS / Max Rossi
Subscribe
Italians weigh up next steps as Matteo Renzi resigned as Prime Minister after devastating blow to his reforms. However, despite rejecting Renzi's proposals, the Italian people are unlikely to also discard the single Eurozone currency, an expert told Sputnik.

Speaking at a press conference on December 5, 2016, Renzi also called the vote a great celebration of democracy and reassured his fellow reform supporters by taking responsibility for the defeat.

RENZI: The inevitable fate of politicians who fail to say a big pro-European NO to the Eurogroup's belligerent irrationality.

​The referendum was seen by some as a test of Renzi's leadership on which he staked his political future. The political instability triggered by the vote could bring about a brand new period of uncertainty to the Eurozone's third largest economy.

Vincenzo Emanuele, a researcher at the center for electoral studies and Adjunct Professor of the Italian Political System at LUISS Guido Carli in Rome, said that this moment in time is a particularly sensitive time in Italian history.

Renzi quits! Another globalist on the ash heap of history. Hollande & Merkel next.

​"The consequence of this vote — it is difficult to make a reliable forecast because the ball is in the hands of president for the Republicans and he has to appoint a new prime minister. In my view there are two options, they can appoint a government, similar to as the one we had in 2011, after the fall of then Prime Minister Silvio Berlusconi. This should deal with current affairs and rapidly approve a new election law and bring the country to new elections," Mr. Emanuele told Sputnik.

An alternative to this, as suggested by Mr. Emanuele, would be to appoint one of the deputy leaders of Renzi's government, thus allowing the current government to continue until 2018.

Mr. Emanuele believes that the result of the vote may have come as a shock for Renzi, given the vast majority of people who rejected his reforms.

However, the question that remains on the lips of so many people in Italy is the extent of the financial upheaval this could cause. At the same time, the fact people rejected Renzi's reforms does not mean they will reject the single currency, said Mr. Emanuele.

"Italy is one of the countries with the highest private savings in the world. So people would put these savings at risk if we would exit the Eurozone, the remain option is the most likely one," he told Sputnik.