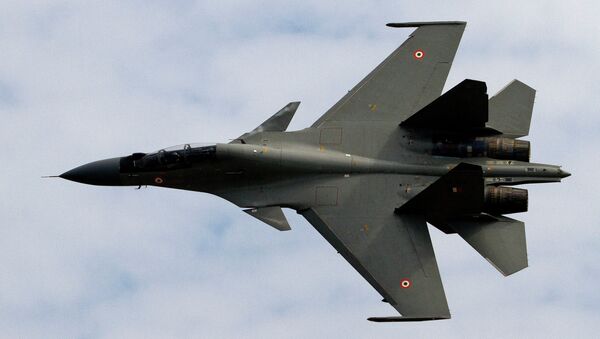 © AP Photo / Anupam Nath
Subscribe
India’s main focus is to export naval vessels in order to make its presence felt beyond the Malacca Straits. But it is also trying to leverage the commonality of Russian equipment with Vietnam, Malaysia and Indonesia.

Sources told Sputnik that the agreement was signed at a meeting between India’s Defense Minister Manohar Parrikar and his visiting Vietnamese counterpart Gen Ngo Xuan Lich.

Vietnam has 36 Russia-made Sukhoi-30 fighter jets in service while the Indian Air Force operates over 200 jets of similar make. This puts India in an ideal position to pass on the finer points of handling Sukhoi jets to countries that have also inducted it in their air force.

In September this year, Indian Prime Minister Narendra Modi had announced a $ 500 million credit line for defense co-operation during his visit to Vietnam. However, it is not clear whether the training costs would be financed through this credit line. India has also agreed to help Vietnamese in the upkeep of the Su-30MK2 aircraft.

During Modi’s visit to Vietnam in September this year, bilateral ties were upgraded to Comprehensive Strategic Partnership.