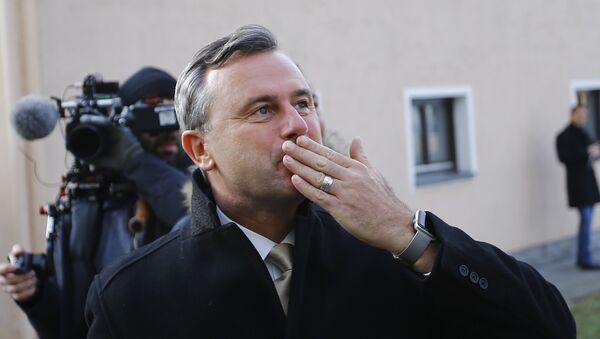 "We have to remember that the general paradigm of political issues is not changing, there is still an Islamism threat, the country is plagued by mass unemployment and the reforms are lagging, and so on. So, all of it is still there, and as for the Freedom Party, Norbert Hofer, has laid a very good foundation and set the stage for further internal political changes," Kickl, who served as Hofer's campaign chairman, said.

Kickl added that Hofer stood on his own against the political and media establishment and advised media "to change their strategy and to begin to inform about political events again instead of meddling in politics themselves."

Austrian Chancellor Congratulates Van Der Bellen on Victory in Election
Hofer's campaign chairman also stressed that his candidate had made incredible progress in just one year, amassing 46 percent of the votes despite many doubting a few months earlier that Hofer would even make it to the second round of the presidential election.

Van der Bellen won in Sunday presidential rerun called after Austria’s top court overturned the results of May’s election over postal vote irregularities following an appeal from the far-right Freedom Party. The rerun was originally scheduled for October 2, but had to be postponed when some of the glue strips designed to seal postal votes came unstuck, rendering the ballots invalid.