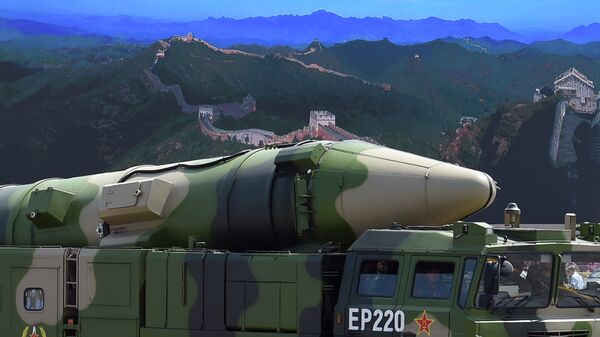 After US President-elect Donald Trump defied recent geopolitical norm by speaking with the president of Taiwan, the Chinese military tested ten DF-21 missiles in November as part of a show of force, ostensibly intended for Trump, per the Washington Free Beacon.

​Although mainland China refuses to acknowledge the sovereign rights of Taiwan, the US has a long history of selling billions of dollars in weapons to the island nation.

​Meanwhile, China’s display of force is evidence that “the PLA is banging some drums to provide background for military psychological warfare,” Rick Fisher, an expert on China’s military, told the Washington Free Beacon.

​According to a report from the Chinese state-run Xinhua news agency, the DF-21 missiles can “destroy US Asia-Pacific bases at any time.” Further, the dummy-missile test firings comes at a time when the People’s Liberation Army has increased large-scale maritime exercises, according to Fisher.

The DF-21 missiles have a range of approximately 1,000 miles and are capable of carrying maneuverable warheads. The Chinese missile is comparable to the US Army’s decommissioned Pershing II missile, according to the article. The Pershing II program was decommissioned in 1991 as part of a treaty between Russia and the US on intermediate range nuclear arms, according to an Federation of American Scientists issue brief.

Yusuf Unjhwala, an editor at the Indian Defence Forum, wrote in October that China would “definitely” send a slew of “conventional” DF-21s at Indian targets in the event of a “full war” between the nations.