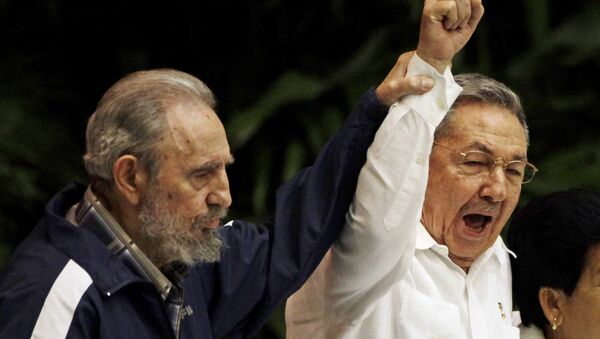 Cuban leader Raul Castro has called on Cubans to continue building Socialism on the island nation, ensuring the country's independence after the death of longtime revolutionary leader Fidel Castro.

Fidel Castro's Ashes Arrive in Santiago de Cuba for Funeral Ceremony
HAVANA (Sputnik) — The president spoke at a mass memorial service dedicated to his deceased brother who led Cuba between the revolution of 1959 and 2008. A funeral procession with the urn containing Castro's ashes arrived in Santiago de Cuba earlier on Saturday.

"Undefeated Fidel inspires us by his example and shows that that we could, we can and we will… We will be able to overcome any obstacles, threats or hardships in implementing our firm commitment to building Socialism in Cuba and ensure the independence and sovereignty of our homeland, which is one and the same," the Cuban president said.

The leader stressed that Castro rejected any personality cult associated with his name and said a law will be proposed to ban the naming of streets and squares after Castro.

"Fidel… rejected the cult of personality until his final days. He did not want for squares, streets and organizations to carry his name after his death… In accordance with the will of comrade Fidel, we will present legislative proposals to fulfill his will during the next session of the National Assembly of People's Power," he said.

The commemoration event was attended by thousands of Cubans who carried national flags and 26th of July Movement black and red banners to mark their support for Castro's vanguard revolutionary organization that toppled Fulgencio Batista in 1959. Other speeches were made by trade union and rural union leaders as well as the heads of various public and youth organizations.

Fidel Castro passed away on November 25 at the age of 90. Cuba received many condolences over Castro's death from leaders around the world. The funeral ceremony will take place in the morning on December 4.