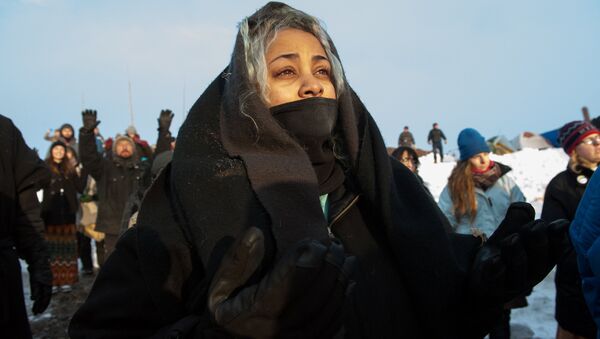 © REUTERS / Stephanie Keith
Subscribe
The Standing Rock Sioux Tribe, the Cheyenne River Sioux Tribe and the Yankton Sioux Tribe have filed an official complaint with the Inter-American Commission on Human Rights (IACHR) about their opposition to the proposed Dakota Access Pipeline (DAPL), calling on the body to ask the US government to halt the project.

The 345-page complaint reiterates the tribe's concerns that the DAPL threatens their environment and cultural heritage and their outrage at the treatment of protesters near their lands. It alleges the pipeline represents "serious and urgent risks of irreparable harm" and asks the commission to demand the US government take steps to prevent "ongoing and escalating violence and harassment of peaceful protesters by state and local police forces, and private security guards," TeleSur reports.

The tribes are asking the commission to request that the US government deny the easement allowing the pipeline to be built under the Missouri River at Lake Oahe, complete a full environmental impact statement in formal consultation with the tribes and immediately take action to guarantee the safety of protesters.

The IACHR is an autonomous body of the Organization of American States tasked with promoting and protecting human rights in the Americans.

"Tribal concerns and treaty rights have been disregarded and ignored under the pretext of the ‘letter of the law' for far too long," said David Archambault II, chairman of the Standing Rock Sioux Tribe, according to the tribe's website. "It is time the United States finally and consistent with its legal and international obligations fully recognize our right to be treated like human beings and as sovereign nations."

"Endangering human and water security is a violation of international human rights. Our treaties are international law and are entitled to respect as such. Beyond that, we are constantly under corporate attack on our cultural and natural resources and spiritual life ways. We are being robbed of treaty lands and it must be stopped," said Chair of the Ihanktonwan Treaty Steering Committee Faith Spotted Eagle.

A hearing on the Human Rights Situation of Indigenous Persons in the Context of Projects and Extractive Industries in the United States will be held December 9 in Washington, DC.

Shortly after the filing, US Attorney General Loretta Lynch posted a video statement on the Department of Justice Facebook page saying the department was "monitoring the situation closely" and in close communication with all parties.

"We continue to support the protesters' constitutional right to free speech and we expect everyone involved to exercise restraint, to refrain from violence and to express their views peacefully," she said, and noted that the department has offered "community policing resources to local law enforcement in North Dakota."

Lynn said she had directed senior department officials to continue working on the issue, but gave no other details.

"We will remain committed to working with all stakeholders to enforce the law, to maintain the peace and to reach a just solution to this challenging situation," she concluded.

The Standing Rock Sioux and tribes from across the US, environmental activists and other supporters have been protesting the construction of the DAPL for months, and thousands have moved into a protest camp near the proposed construction site.

In addition to marches near Standing Rock Sioux lands and in cities around the country, activists have urged concerned citizens to divest from banks funding the $3.8 billion project. After a direct action at the Wells Fargo Bank corporate offices in Minneapolis December 1, the bank requested a meeting with tribal representatives this month.

December 1 marked the beginning of the Global Month of Action against the pipeline project by the Sacred Stone Camp, one of the many groups protesting the pipeline.

US armed forces veterans have been arriving at protest camp sites over the past two days, having offered themselves as "human shields" there following an escalation in violent retaliation by police and private security forces against protesters. Among them is Congresswoman Tulsi Gabbard, an Army veteran, who has called on US President Barack Obama to halt the pipeline.

The UN has condemned the treatment of protesters in North Dakota.

000000
Popular comments
They could file as many complaints as they want. Everyone else in the US has to deal with pipelines running through their town, villages and rivers but I'm sure these protestors did not give a crap. Now that their lives are affected it's a problem.