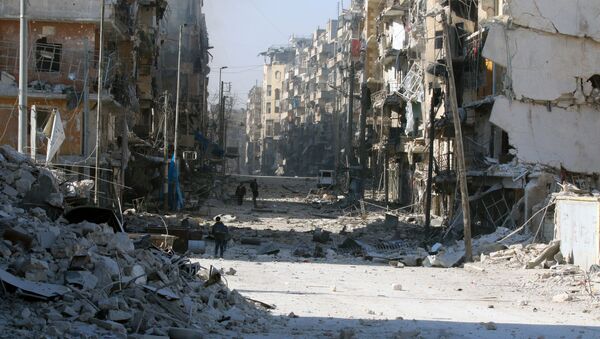 © REUTERS / Abdalrhman Ismail
Subscribe
The Syrian army's command calls on the residents of eastern Aleppo's liberated areas to return to their homes.

DAMASCUS (Sputnik) — The Syrian army's command urged the residents of eastern Aleppo's liberated areas to return to their homes once security has been established.

"The Syrian Army General Command has called on the residents of the eastern districts of Aleppo to return to their homes after security and stability have been restored, as well as with the resumption of the work of public institutions in these areas," the general command said in a statement on Saturday.

Total of 10 Militants Leave Eastern Aleppo in Past 24 Hours
In November, Syrian government forces, supported by local militias, launched a large-scale offensive against extremist groups in the eastern part of Aleppo. The army made major strides earlier this week, liberating almost half of the militant-held areas by late Monday, according to the Russian reconciliation center in Syria.

Earlier on Saturday, militants still encircled in the city again refused to seize the government offer of safe passage out of the city and vowed to continue resistance.

000000
Popular comments
BUT, FIRST, barricade the areas. Clean, keep heated soups etc outside 24/7 until situation get better. Assure they have blankets and warmers. Clean up should begin soon. BUT IF not barricaded, add checkpoints divide areas by barricading X amount of blocks, they could sneak back and rinse repeat .. And kidnap population and rape etc. They MUST be under siege. 24/7 . food etc MUST be moved back and forth. Anti terror ops MUST be conducted. IF NOT it will be , queen for a day. DO NOT allow the same fate to be repeated. BARRICADE!! Add many checkpoints even withing on roads etc. Not to prevent transit, but to CUT them OFF IF they try. MOGARINY was salivating and filling her mouth, because she knows the truth. Illegally armed groups will continue to enjoy support. And DE MISTURA is with them. NOT with Russia , IRAN , Syria and FORGET Hezbollah.
cast235
4 December 2016, 01:50 GMT
000000
i love Syria!
francescoslossel
4 December 2016, 03:17 GMT
000000
Newsfeed
0
New firstOld first
loader
LIVE
Заголовок открываемого материала
Access to the chat has been blocked for violating the rules . You will be able to participate again through:∞. If you do not agree with the blocking, please use the feedback form
The discussion is closed. You can participate in the discussion within 24 hours after the publication of the article.
To participate in the discussion
log in or register
loader
Chats
Заголовок открываемого материала
Worldwide
InternationalEnglishEnglishMundoEspañolSpanish
Europe
DeutschlandDeutschGermanFranceFrançaisFrenchΕλλάδαΕλληνικάGreekItaliaItalianoItalianČeská republikaČeštinaCzechPolskaPolskiPolishСрбиjаСрпскиSerbianLatvijaLatviešuLatvianLietuvaLietuviųLithuanianMoldovaMoldoveneascăMoldavianБеларусьБеларускiBelarusian
Transcaucasia
ԱրմենիաՀայերենArmenianАҧсныАҧсышәалаAbkhazХуссар ИрыстонИронауОssetianსაქართველოქართულიGeorgianAzərbaycanАzərbaycancaAzerbaijani
Middle East
Sputnik عربيArabicArabicTürkiyeTürkçeTurkishSputnik ایرانPersianPersianSputnik افغانستانDariDari
Central Asia
ҚазақстанҚазақ тіліKazakhКыргызстанКыргызчаKyrgyzOʻzbekistonЎзбекчаUzbekТоҷикистонТоҷикӣTajik
East & Southeast Asia
Việt NamTiếng ViệtVietnamese日本日本語Japanese俄罗斯卫星通讯社中文（简体）Chinese (simplified)俄罗斯卫星通讯社中文（繁体）Chinese (traditional)
South America
BrasilPortuguêsPortuguese
NewsfeedBreaking
03:15 GMTUnited Russia Party Wins State Duma Elections With 49.82% of Votes
02:55 GMT911 Call Reveals Boyfriend Was Seen 'Slapping' Petito Two Weeks Before Her Disappearance - Report
02:31 GMTBiden Reaffirms Strong US-UN Partnership at Meeting With Guterres
02:22 GMTIndia Cuts Off Communications, Internet in Kashmir Due to Terrorists, Reports Say
02:12 GMTMember of CIA Chief’s Team Affected by ‘Havana Syndrome’ During Work Trip to India, Report Says
01:22 GMTClimate Change-Driven Cyclones Could be Regular Sights in Europe in 30-50 Years, Meteorologist Warns
01:02 GMT‘License to Murder Children?’ Psaki Panned for Bringing Up Biden’s Losses in Kabul Strike Answer
00:38 GMTMilley Told Admiral to Halt Operations in Pacific That China Could Deem 'Provocative', Authors Claim
00:11 GMTPremier League Goals of the Weekend
YesterdayMali Looks for ‘Plan B’ to ‘Bolster Our National Defense’ As French Mission Exits, Leaving Chaos
YesterdayGlobal Pandemic Caused Significant Surge in Demand For Black Bridal Dressers, Fashion Experts Say
YesterdayCoronavirus Death Toll Surpasses 1918 Influenza to Become Deadliest Pandemic in US History
YesterdayIran's New Defense Minister Says Enemies Will Get 'Crushing Response' - Report
YesterdayBorrell Expresses Regrets That EU Countries Were Not Invited to Join AUKUS
Yesterday‘Go Back to Mexico’: Shocking Video of US Border Patrol on Horseback Seen Whipping Haitian Refugees
YesterdayCDC Recommends Admitting Afghan Refugees 21 Days After Measles Vaccine, Reports Say
Yesterday26 GOP Governors Demand Meeting With Biden Amid Deepening Frustration Over Border Crisis
YesterdayDiscovery of Bats With Close Sars-CoV-2 Relative Add More Evidence to Natural Origins of COVID-19
YesterdayFull Harvest Moon Lights Up Sky Over Buenos Aires
Yesterday‘I Got Chills’: Travel Blogger Finds Video of Gaby Petito’s Van