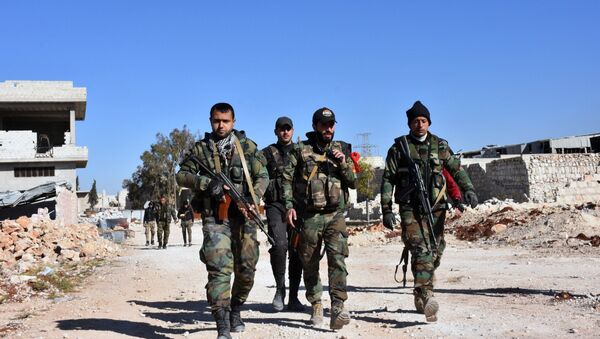 © AFP 2021 / GEORGE OURFALIAN
Subscribe
Russia and Iran are teaming up to carry out a joint humanitarian operation in Aleppo aimed at helping Syrian civilians who escaped from the clutches of terrorists, advisor to Iran's Foreign Ministry Hossein Sheikholeslam told Sputnik. Still, a lot remain to be done to rescue residents being held hostage by Islamists.

Russia and Iran are developing a joint operation to provide humanitarian aid in Aleppo, after the Syrian Arab Army (SAA) managed to liberate most of the Syrian city.

"First of all, I would like to congratulate the residents of Aleppo, which escaped from the clutches of ruthless terrorists," Hossein Sheikholeslam, the Iranian Foreign Minister's advisor, told Sputnik Persian, "Secondly, the Islamic Republic of Iran considers it its duty to the people of Aleppo to ensure that all needs of those who managed to survive and escape are met."

In Aleppo, 'Russo-Syrian Alliance Has the Upper Hand, Will End Up Victorious'
Sheikholeslam called attention to the fact that Iran has repeatedly taken part in humanitarian operations throughout Syria in close cooperation with the Syrian government forces and Russia.

Likewise, he stressed, Tehran is now ready to provide all necessary assistance and support to residents of Aleppo.

"We are completely prepared to carry out this joint humanitarian operation together with Russia, and we will use all our resources we have on the frontline — both military and financial. We will provide basic necessities, most notably clean drinking water, medical supplies, food, warm clothes [to Aleppo residents] and will also send our doctors and healthcare specialist [to the city]," Sheikholeslam emphasized. 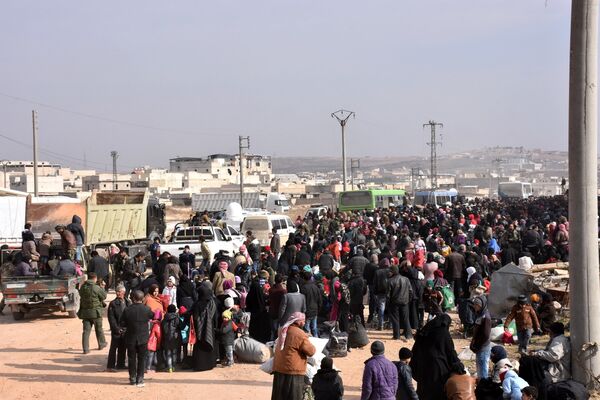 Syrians that evacuated the eastern districts of Aleppo gather to board buses, in a government held area in Aleppo, Syria in this handout picture provided by SANA on November 29, 2016.
© REUTERS / SANA

According to Farzad Ramzani-Bonesh, Iranian independent expert in Middle Eastern affairs, the Russo-Iranian humanitarian operation in Aleppo will become a high-profile event which will surely surprise the West and its Gulf allies.

"While speaking about the joint Russo-Iranian operation aimed at providing humanitarian aid to the residents of Aleppo, one should remember some important points. Over the past two years, Western players and their Arab allies have been relentlessly accusing our countries [Russia and Iran] of providing military assistance to Bashar al-Assad on all fronts, but doing virtually nothing to save the lives of civilians caught up in the blockade," Ramzani-Bonesh told Sputnik, stressing that these allegations were totally unfounded.

Russian MoD: UK Not Providing Aid to Aleppo, Must Refrain From Sabotaging Help
The Iranian expert emphasized that it had been largely neglected by the Western media that besides engaging in counter-terrorism operations on the ground Russia and Iran were taking every effort to save Syrian civilians.

Given the fact that Daesh (ISIS/ISIL), al-Nusra Front and other extremists used the Syrians as "human shields" it was extremely difficult to carry out these rescue operations, Ramzani-Bonesh admitted.

"However, now that Assad's army has made significant progress [in Aleppo] with the assistance of its allies and liberated large areas [of the city], it's time for Iran and Russia to strike back in response to the information war waged by Western and some Arabian mass media [against Russia and Iran] which falsely accused us of inaction and unwillingness to provide humanitarian aid to Syrian civilians," Ramzani-Bonesh pointed out, referring to the recent Russo-Iranian humanitarian initiative.

The Iranian expert highlighted that it is extremely important to save those Aleppo residents who are still being used by terrorists as "human shields" and ensure the safety of humanitarian convoys heading to Aleppo. 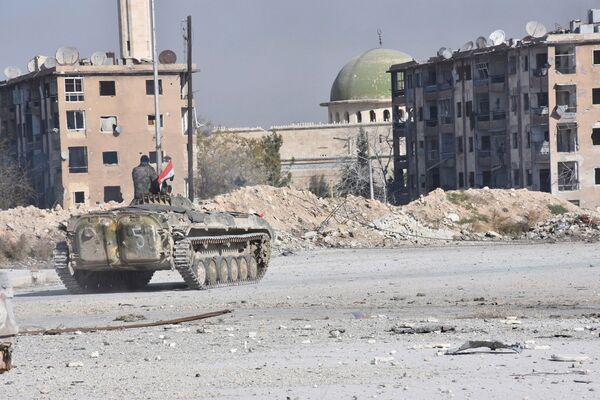 On Friday the Russian Ministry of Defense reported that Russia has already delivered more than 5 metric tons of humanitarian aid to the Syrian provinces of Aleppo and Damascus.

"Within the last 24 hours, two humanitarian events have been held, in the course of which civilians received aid: in the Hananu 3 area of the Aleppo city and al-Mahalej camp for refugees in the Aleppo province — about 4 tons; in the Seid Naya area in the Damascus province — about one ton," the Russian Defense Ministry's official statement says.

Meanwhile, a Russian sapper unit has been deployed to Syria to conduct mine-clearing operations in the city.

Earlier this week Russian Defense Ministry's spokesman Maj. Gen. Igor Konashenkov highlighted that the US, the UK, France and the UN have yet to offer humanitarian assistance to 90,000 Aleppo residents liberated a few days ago.

Later, responding to the UK's unfounded allegations regarding Moscow halting its humanitarian assistance to Syrians in Aleppo, Konashenkov reiterated Saturday that "all this time, residents of eastern neighborhoods [in Aleppo] have been receiving daily humanitarian aid, medicine and warm clothing from the Russian Center for reconciliation and the Syrian government."

"The United Kingdom, in the course of all the years of civil war in Syria has not allocated a single gram of flour, a single pill or blanket to help civilians," he added.

000000
Popular comments
U.K ONLY care to train arm ILLEGAL groups. Like at Sierra Leone. False FLAGS to get the diamonds. They want to give NOTHING. They were SALIVATING , until Russia got in. BUT Russia is NOT alone. Ask CSTO to help with aid. Will be great experience. They can also, patrol corridors to help civilians. Spot arty , mortars so Russia can destroy them FAST. SCO may help and BRICS. Maybe, MAYBE, ASEAN would too. GO make military alliances and anti terror joint task. FORGET U.S. It won't happen , NOT until TRUMP grab full control. May take years.. Or never.
cast235
3 December 2016, 16:48 GMT3
000000
Us and EU have no one to blame but themselves for this political and social tragedy. Hopefully things in the US will now change under a new administration.
PaleRider
3 December 2016, 18:15 GMT2
000000
Newsfeed
0
New firstOld first
loader
LIVE
Заголовок открываемого материала
Access to the chat has been blocked for violating the rules . You will be able to participate again through:∞. If you do not agree with the blocking, please use the feedback form
The discussion is closed. You can participate in the discussion within 24 hours after the publication of the article.
To participate in the discussion
log in or register
loader
Chats
Заголовок открываемого материала
Worldwide
InternationalEnglishEnglishMundoEspañolSpanish
Europe
DeutschlandDeutschGermanFranceFrançaisFrenchΕλλάδαΕλληνικάGreekItaliaItalianoItalianČeská republikaČeštinaCzechPolskaPolskiPolishСрбиjаСрпскиSerbianLatvijaLatviešuLatvianLietuvaLietuviųLithuanianMoldovaMoldoveneascăMoldavianБеларусьБеларускiBelarusian
Transcaucasia
ԱրմենիաՀայերենArmenianАҧсныАҧсышәалаAbkhazХуссар ИрыстонИронауОssetianსაქართველოქართულიGeorgianAzərbaycanАzərbaycancaAzerbaijani
Middle East
Sputnik عربيArabicArabicTürkiyeTürkçeTurkishSputnik ایرانPersianPersianSputnik افغانستانDariDari
Central Asia
ҚазақстанҚазақ тіліKazakhКыргызстанКыргызчаKyrgyzOʻzbekistonЎзбекчаUzbekТоҷикистонТоҷикӣTajik
East & Southeast Asia
Việt NamTiếng ViệtVietnamese日本日本語Japanese俄罗斯卫星通讯社中文（简体）Chinese (simplified)俄罗斯卫星通讯社中文（繁体）Chinese (traditional)
South America
BrasilPortuguêsPortuguese
NewsfeedBreaking
20:15 GMTCIA Tip-Off Helped India Confiscate Smuggled Afghan Heroin Worth $24 Bln, Says BJP Parliamentarian
20:05 GMTUS House Passes Bill Ensuring Abortion Access
19:49 GMTIndia 'Central' to France's Indo-Pacific Vision, But Unlikely to Get Nuclear Technology, Says Expert
18:59 GMTManchester United’s Glut of Attackers Giving Ole Gunnar Solskjaer ‘Headaches’
18:50 GMT‘The View’ Co-hosts Test Positive for Covid Minutes Before VP Harris Interview
18:10 GMTHuawei CFO Meng Wanzhou Pleads Not Guilty to Fraud, Conspiracy Charges After Reaching Deal With US
18:04 GMTOne Hundred and Counting: China Rolls Out Evidence of US Attempts at Meddling in Hong Kong Affairs
17:56 GMTCan He Hit a Ball Like That? Trump Jeers at Biden as He Shows Off Golfing Skills
17:54 GMTProtesting Indian Farmers’ Leader Urges US President to Raise Their Concerns While Meeting PM Modi
17:47 GMTUnited Airlines Fined $1.9M by US Transportation Dept. for Breaking Rules on Long Tarmac Delays
17:38 GMTNetizens Left in Stitches After Canadian PM Trudeau Fails to Pronounce LGBTQ2+
17:24 GMTAhead of QUAD Meeting, Congress Leader Rahul Gandhi Taunts PM Modi, Says He's 'Scared of China'
17:01 GMTThousands of Healthcare Activists Hold Nationwide Protest in India Demanding Better Pay, Facilities
16:55 GMT'Lying Diplomacy': China Hits Out at India, Japan as Quad Members Accused It of Economic Coercion
16:52 GMTUS Treasury Greenlights Certain Transactions With Taliban
16:48 GMTWeak, Boring and Out-of-Touch: Labour Leader Panned by Voters on Eve of Conference
16:36 GMTMessi to Miss Montpellier Game, But May Feature in PSG's Blockbuster Clash Against Man City
16:29 GMTIsraeli Spy Cell Might Have Stolen Sensitive Defence Industry Data From Ankara, Turkish Media Claims
16:24 GMTNovatek Says Has Nothing to Do With Gyetvay Trial in US But Will Support Its Top Manager
16:18 GMTBitcoin, Ethereum Fall as China Declares All Cryptocurrency-Related Transactions Illegal