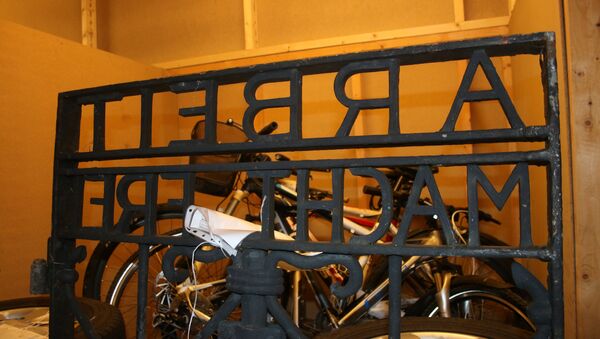 Norwegian police officers from Bergen stumbled upon something unexpected in the desolate countryside of Gaupås. Hidden amongst a pile of junk covered by a tarpaulin, they found the infamous gate from the Nazi Dachau concentration camp bearing the legend "Arbeit macht frei", which translates as "Work sets you free."

The police were alerted via an anonymous tip-off, Kari Trones, police representative in the West district, told Norwegian newspaper VG.no. According to the spokesperson, the gates were found in a sparsely inhabited area near a shooting range. The gate is in good condition despite some rust. It remains unknown whether the gate had been lying there for a long time.

"[The gate] lay under a tarpaulin with some junk in a car park near a country road. It is a mystery how it was stolen and came to be hidden in Norway. We have no suspects in this case, but it will be investigated by the police in Bergen, " Trones said.

Germany Creates Virtual Auschwitz Model to Help Prosecute Former SS Guards
The spokesperson further said that crime technicians investigated the scene. "It is likely that the gate was there for a long time, and it was impossible to find DNA on it," Trones said.

The gate, weighing up to 100 kilograms, has been missing since 2014. The director of the Dachau Concentration Camp Memorial Gabriele Hammermann described it as a "deliberate, reprehensible attempt to deny and obliterate the memory of the crimes."

After the theft, the center hired a locksmith to create a replica based on historical photos from 1936 and more recent pictures from tourists.