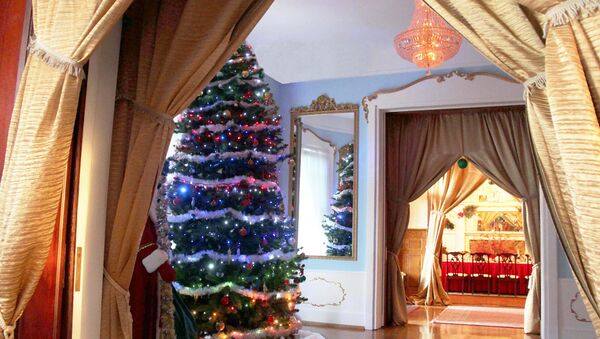 © Sputnik
Subscribe
The Russian Cultural Center in Washington, DC is opening its doors to one of the city’s most prestigious boarding school’s Annual Christmas House Tour on Friday and Saturday.

US Institute of Russian Culture Honors Author of ‘The Icon and the Axe’
WASHINGTON (Sputnik) – St. Albans school for boys in grades 4-12 has held this holiday tradition since 1983, and this year for the first time the Russian Cultural Center was offered to participate as one of the five hosts for the event.

During a walkable tour of the historic Kalorama neighborhood, students, their parents, faculty, and other guests, will also visit the diplomatic residences of the Ambassador of Ecuador, the Ambassador of Ireland, the Ambassador of the Netherlands, as well as the home of Gloria Story Dittus. Some 1,500 people are expected to participate in the two-day event. 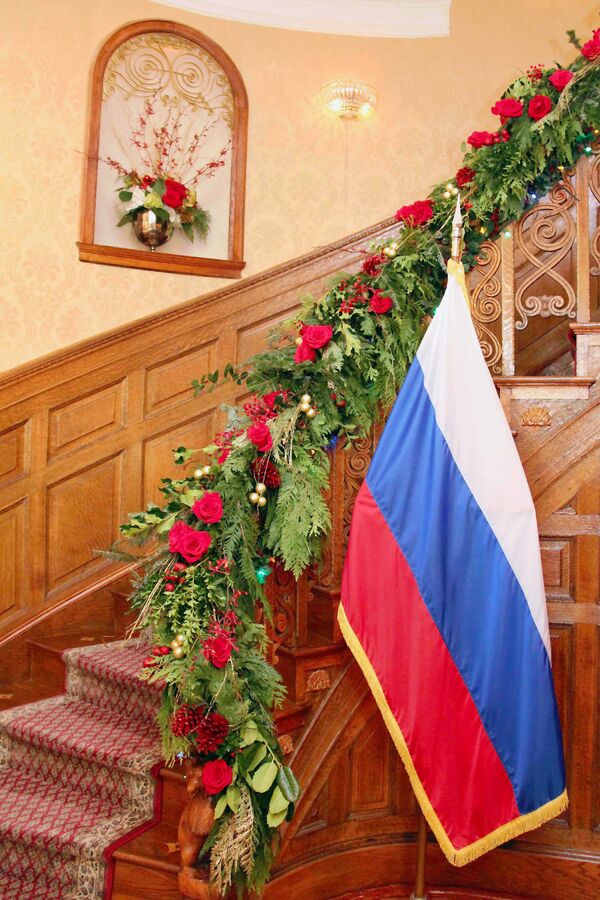 Head of the Russian Cultural Center (RCC) Oleg Zhiganov told Sputnik that the center gladly accepted the invitation because it was an opportunity to tell American guests about Russian culture.

"The RCC has prepared a special program for the guests that will feature presentations by volunteers about Russian culture and history, slideshows and live performances, among other activities," Zhiganov said. "We would like as many Americans as possible to know and understand Russian history and culture."

The RCC tour will be focused on three signature rooms — the Moscow Hall, the Great Hall and Russian-American Room — each with its own special program.

The program kicks off in the Moscow Hall where guests will hear the history of the center and view a traditional Russian Christmas table setting comprised of tea, samovar, sushki, pryaniki, mandarins and Soviet champagne.

The Moscow Hall earned its moniker because the room’s ceiling depicts the city’s main historic attractions, the Kremlin, the Cathedral of Christ the Savior, Lomonosov Moscow State University, and the Bolshoi Theatre. These sites symbolize the center’s activities which are to strengthen academic, scientific, educational, spiritual, and historic ties between Russia and the United States.

Visitors will then proceed to the Great Hall, named as such because Peter I and Catherine II’s portraits adorn its walls. In that room, guests will learn about the role of these two historic figures in Russian history.

In the Great Hall the guests will enjoy the centerpiece of the tour: a traditional Christmas tree along with volunteers explaining Russian holiday customs.

The tour will finish in the Russian-American room, where the guests will be treated to live piano music and performances by children from two Russian-language schools.

The visitors will also get an opportunity to watch slideshows depicting significant periods in the center’s life, beginning from the construction of the building to the times when it was a Russian school, a Russian consulate to the present.

Zhiganov is hopeful that the event will inspire participants to broaden their knowledge about Russia.

"I have faith the RCC program will pique the guests’ interests and compel them to return to the center to learn more about Russia’s rich culture or even take Russian language lessons," he said.

Zhiganov also noted that there is growing interest among young Americans to learn about Russia.

"Judging by the number of people attending Russian language classes at the center, I can tell that the interest to the Russian culture and history among the American youth is growing," he stated.

Since Russia is constantly in the headlines, Zhiganov explained, they want to find out more about the country as evidenced by the rising number of students.

Founded over a century ago, in 1909, St. Albans School was ranked the smartest boarding school in Washington, DC, by Business Insider last year. The Episcopal school, which stands beside the Washington National Cathedral, places great emphasis upon the moral and spiritual development of boys, according to school Headmaster Vance Wilson.

The RCC was established in December 1999 by a Bilateral Agreement between the governments of the United States and Russia to promote friendly relations in the 21 century.