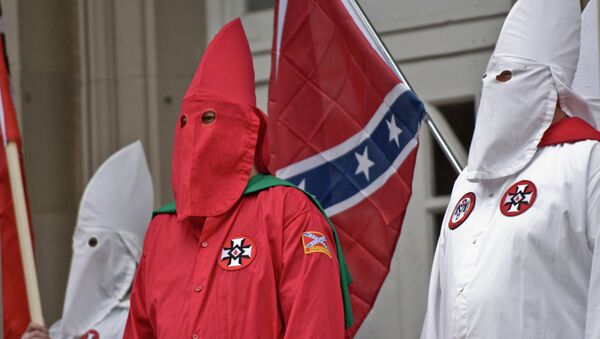 © Flickr / Martin
Subscribe
Gary Munker, a Long Island, New York, resident claiming that he is a spokesman for the racist group Ku Klux Klan, proudly proclaimed to AFP that his organization’s membership “grows by the day,” and that the notorious organization will stage a rally on December 3, to celebrate the victory of Donald Trump’s presidential bid.

Trump was infamously endorsed by white nationalist and KKK member David Duke, an endorsement that the President-elect would eventually repudiate. Trump’s slowness to do so led to an unseemly association between Trump and the hate group, one that his political adversaries have been glad to play up.

And yet for all the news coverage that Duke and the Klan receive, they are a minor organization, at best. The Southern Poverty Law Center (SPLC) estimates their membership at 6,000, and instead of atrocities including  lynchings and violent intimidation like the KKK of the past, their main tactic these days is handing out fliers and cursing under their breath. The Anti-Defamation League, points out that data does not support Munker’s membership claims, and that there were 74 recorded incidents of KKK leafleting in 2016, compared to 86 in 2015.

While there seems a natural connection between the KKK and the “alt-right,” symbolized by Breitbart editor and Trump strategist Steve Bannon, both the KKK and the SPLC repudiate that link. Munker also told AFP that he “wonders about [the alt-right’s] integrity,” since they allow anyone into their movement instead of only Christians. Most of the alt-right’s leadership insist that they do not hate anyone and only want to protect the rights of white people, and according to the SPLC’s Mark Potok, resulting in a distancing from the historically bloodthirsty KKK.

Originally founded by Confederate war veterans after the American Civil War, the KKK worked to suppress the activities of black freedmen and white Republicans, who they perceived as threats to what they considered to be moral and racial purity in the South. Loosely aligned and lacking centralization, the organization eventually collapsed.

The KKK resurged in the 1910’s and 20’s with a more coherent mission statement, adding opposition to Jews and Roman Catholics to their existing hatred for blacks, and labeling themselves defenders of justice, purity, and America’s moral fiber. At their 1924 peak, the KKK claimed to have six million members, but after their leadership was revealed to be murderers, thieves, and terrorists, all but the most hardline members abandoned them.

The modern KKK can trace itself to the Civil Rights movement, but today it more resembles its 19th century incarnation: many small and loosely-aligned groups whose members have drastically varied levels of involvement. They have been slowly shrinking for 50 years, from 40,000 estimated members in the 1960s, to the estimated 6,000 today.