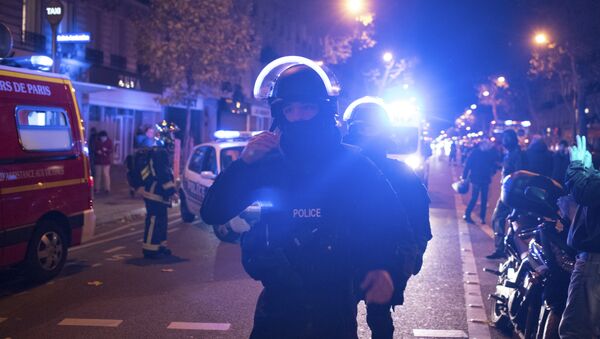 © AP Photo / Kamil Zihnioglu
Subscribe
Nearly a year after setting up a new specialist unit to deal with counterterrorism, in the face of severe criticism over poor intelligence cooperation, the EU's law enforcement agency, Europol, has warned of increased attacks in Europe in the wake of a weakened Daesh in Syria and Iraq.

Europol — together with member states' intelligence services — came under attacks over its lack of coordinated intelligence-sharing following the Charlie Hebdo and November 13, 2015 attacks in Paris.  It was discovered that some of the attackers were 'on the radar of some agencies in EU member states, but the information had not been shared.

Although the new ECTC —  in The Hague, the Netherlands — was planned well ahead of the Paris attacks, the new HQ was designed to help centralize European counterterrorism policy and implementation.

Nearly a year on, Europol is now warning that if Daesh is "defeated or severely weakened" in Syria and Iraq by the coalition forces, there may be an increased rate in the return of foreign fighters and their families from the region to the EU or to other conflict areas. Counterterrorism experts expect that Daesh will also start planning and dispatching attacks from Libya.

​"The last two years have seen a number of jihadist attacks, several of which have caused mass casualties. The scale of this threat has been widely acknowledged in Europe, triggering an intensified cooperation between police and security services across the continent leading to an increase of arrests and plots foiled before terror attacks could be carried out," said Europol's Director Rob Wainwright.

"This shows that the increased cooperation and exchange of data between all relevant services across Europe is a successful means to mitigate the threat posed by [Daesh]. The threat is still high and includes diverse components which can be only tackled by even better collaboration."

Europol's latest assessment of the terror threat, 'Changes in Modus Operandi of IS revisited' states that:

"The EU is facing a range of terrorist threats and attacks: from networked groups to lone actors; attacks directed by IS and those inspired by IS; the use of explosives and automatic rifles as well as bladed weapons and vehicles; and carefully prepared attacks alongside those that seem to be carried out spontaneously."

10 key judgements of Europol’s report: Changes in Modus Operandi of #IS revisited. Further attacks in the #EU, likely to be attempted. #ISIS pic.twitter.com/BH0ZgXtVP7

It says that EU member states taking part in the anti-IS coalition are regarded by Daesh as legitimate targets, as a result of which France remains high on the target list for Daesh aggression in the EU, as well as Belgium, Germany, The Netherlands and the United Kingdom.

000000
Popular comments
DAESH collapsed long ago. Russia hit it so hard, and destroyed all oil operations, trade routes , convoys and blew vehicles . They were removed from Turkey Syria border by Russia. NOT U.S like History Channel PROPAGANDA said. Now that Syria is regaining control, and Syrian's are bee LIBERATED from terrorists, the flow of Syrian's running will end. And as Russia and Syria reconstruct. Russia have the cash to do it. Syria will repay one day when it can.
cast235
2 December 2016, 18:12 GMT
000000
I don't know if Russia is taking as much as Europe...refugees...or why refugees want to go to Europe and not Russia. Russia is part of the war and should take a part of the refugees too. No ?
l.
2 December 2016, 19:09 GMT
000000
Newsfeed
0
New firstOld first
loader
LIVE
Заголовок открываемого материала
Access to the chat has been blocked for violating the rules . You will be able to participate again through:∞. If you do not agree with the blocking, please use the feedback form
The discussion is closed. You can participate in the discussion within 24 hours after the publication of the article.
To participate in the discussion
log in or register
loader
Chats
Заголовок открываемого материала
Worldwide
InternationalEnglishEnglishMundoEspañolSpanish
Europe
DeutschlandDeutschGermanFranceFrançaisFrenchΕλλάδαΕλληνικάGreekItaliaItalianoItalianČeská republikaČeštinaCzechPolskaPolskiPolishСрбиjаСрпскиSerbianLatvijaLatviešuLatvianLietuvaLietuviųLithuanianMoldovaMoldoveneascăMoldavianБеларусьБеларускiBelarusian
Transcaucasia
ԱրմենիաՀայերենArmenianАҧсныАҧсышәалаAbkhazХуссар ИрыстонИронауОssetianსაქართველოქართულიGeorgianAzərbaycanАzərbaycancaAzerbaijani
Middle East
Sputnik عربيArabicArabicTürkiyeTürkçeTurkishSputnik ایرانPersianPersianSputnik افغانستانDariDari
Central Asia
ҚазақстанҚазақ тіліKazakhКыргызстанКыргызчаKyrgyzOʻzbekistonЎзбекчаUzbekТоҷикистонТоҷикӣTajik
East & Southeast Asia
Việt NamTiếng ViệtVietnamese日本日本語Japanese俄罗斯卫星通讯社中文（简体）Chinese (simplified)俄罗斯卫星通讯社中文（繁体）Chinese (traditional)
South America
BrasilPortuguêsPortuguese
NewsfeedBreaking
06:55 GMTAs US Prepares to Leave Iraq, Ex-Advisor to Iraqi President Says Kurds Need Reliable Partners
06:52 GMTTwo Women Arrested for Tearing Up Trump Signs and Snatching MAGA Hat From Child Escape Jail Time
06:46 GMT'F**k Joe Biden!' New Yorkers Take to Streets to Protest Vaccine Mandates, Link COVID Rules to Nazis
05:56 GMTAustralia May Rent or Buy Nuclear Subs From US, UK Until Its Own Fleet is Built Under AUKUS Deal
05:34 GMTColombia Condemns Maduro’s Participation in Celac Summit
05:14 GMTOver 50 London Police Officers Deployed to Oxford Street After Reports of Gunman - Video
04:30 GMTNot My Style: Adorable Golden Retriever Doesn't Like Wearing Shoes
04:26 GMTLive Updates: India Registers 30,773 New COVID-19 Cases
03:52 GMTMeghan Markle Wears Earrings Made of Same Diamonds That Decorate Her Mysterious Pinky Ring - Report
03:12 GMTIsraeli Security Forces Capture Last Two Fugitives Who Escaped From Gilboa Prison, IDF Says
03:10 GMTFrench Blindsided as AUKUS Details Were Discussed at G7 Summit Leaving Macron Out - Report
02:25 GMTBiden Administration Worried High-Level UN Meetings Will Become COVID-19 ‘Superspreader’ - Report
01:40 GMTKhamenei Pledges Support to Iranian Athletes Who Refuse to Compete With Israelis
01:25 GMTAOC Met Gala Dress Designer Owes Multiple Taxes for Withholding Worker Benefits, Income Checks
YesterdayFrance Decries UK's 'Opportunism' And Participation in AUKUS, Calling London 'Fifth Wheel'
YesterdayMayor of Johannesburg Killed in Car Accident - Reports
YesterdayPython Falls From Rooftop in Australia After House Sheathed From Snakes - Photos
YesterdayWatch: SpaceX Capsule With All-Civilian Crew Splashes Down in Atlantic
YesterdayReport: Iran's Top Nuclear Scientist Was Killed by Weaponized Robot in Long-Planned Operation
YesterdayFour Arrested at 'Justice for J6' Rally, No Clashes With Counterprotesters