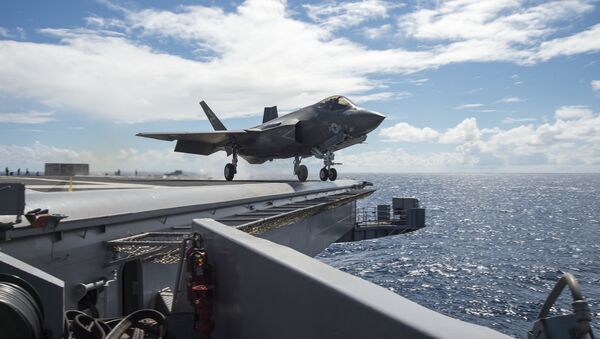 © Flickr / ermaleksandr
Subscribe
It remains to be seen whether the emergence of the new US carrier-launched stealth fighter F-35C will allegedly give the US Navy more combat attack flexibility, Russian military expert Vasily Kashin told Sputnik China.

Quite a Spin: US Navy F-35C’s 'Precision' Damages Runways
In an interview with Sputnik China, Russian military expert Vasily Kashin questioned whether the emergence of the new US carrier-launched stealth fighter F-35C will ostensibly provide the US Navy with any more combat attack flexibility.

In the article, the author claimed that "the emergence of a first-of-its kind carrier-launched stealth fighter is intended to give the [US] Navy more combat attack flexibility and attack sophisticated enemy air defenses or fortified targets from a sea-based carrier."

AIRCRAFT CARRIER
F-35C Lightning II carrier variants, assigned to the Salty Dogs of VX 23, prepare to take off from the flight deck. pic.twitter.com/jXEDNCKZJ1

Touching upon the issue, Vasily Kashin said that "to track down and destroy the US aircraft carrier combat groups, the Chinese will mainly rely on a combination of ballistic anti-ship missiles, submarines and land-based attack aircraft equipped with anti-ship missiles."

In addition, China is increasing investments in the development of large "strategic" reconnaissance drones resembling the US-made Global Hawk, as well as maritime reconnaissance satellites, according to Kashin.

He recalled that the Chinese J-20 fifth generation fighters are significantly larger and heavier than the F-35, which is why they are primarily designed for performing over-the-sea missions as attack aircraft carrying anti-ship missiles.

Kashin went on to say that the US aircraft carrier battle groups with the F-35C fighters on board will face the threat emanating from the anti-ballistic missiles, the long-range H-6K bombers with heavy anti-ship cruise missiles, as well as the J-20-like stealth attack aircraft and supersonic anti-ship missiles launched from Chinese submarines.

"When the F-35 was being developed, the task of providing an aircraft carrier strike group with air defense was not a priority for this fighter jet which was primarily designed for destroying coastal targets. As a result, this warplane looks like an aircraft which is not suited for today's possible combat realities the US may face in the Western Pacific," Kashin said.

In this vein, the F-35 will have to deal with enemy fighters  which will be equipped with powerful radars, long-range stealth "air-to-air" missiles, and which will be superior to the F-35 in terms of armament, speed, maneuverability and range, according to him.

The F-35 will have to prevent massive missile strikes and carry out permanent patrolling for air defense purposes. Also, the F-35 should itself act as a powerful anti-ship missile launching vehicle, something that may lead to increasing the combat load for the plane," Kashin added.

Touting the F-35 as "an undoubtedly perfect and revolutionary aircraft", Kashin at the same time pointed out that "it was created in line with deeply erroneous strategic views of the 1990s which claimed that the US superiority at sea and in the air is guaranteed under all conditions."

No Pain No Gain? Lockheed Struggles to Finalize Deal With Pentagon on F-35 Lots
"It remains to be seen whether the Americans will manage to succeed with their objectives [with the help of the F-35] in new conditions," Kashin concluded.

The F-35 project, beleaguered from its inception, is expected to cost up to $1.5 trillion over the next 55 years, making it the most expensive defense program in history.

According to a memo from Michael Gilmore, the US Defense Department's director of operational testing and evaluation, while the warplane's development phase is scheduled to officially end in 2018, the F-35 program is at "substantial risk" of not meeting the requirements.

000000
Popular comments
F35 is molded around the YAK 141 .Lockheed Martin paid a lot, after the Soviet Union was ended, to get it airborne,. The YAK 141 was a VTOL , exactly as the MARINES version. It was to replace the YAK 38? It was to b supersonic and way more. Lockheed Martin bought a license. THAT'S why this plane is smaller looks different. It was primarily a VTOL, where you don't want a BIG plane. Avionics updates will determine it's capabilities and will have it's own jewel's. I think they just judging on LOOKS. As most fanboys. IF Russia would had develop it , with stealth as it was planned it would had been out there long ago. There been issues. But I still believe it will do what is supposed to do. However, is NOT what many think. Plane is a TURKEY, IF used on some roles. But it will definitely will shoot down planes from long distances. Usually without the enemy knowing is there. NOW IF you will send it against Russia, you may have something else coming. After all, is based on HAVE BLUE and Soviet know how. The MARINES version tail was Soviet designed and built. In 1964, Pyotr Ufimtsev, a Soviet mathematician, published the work of stealth and angles later used on F117 and have blue. Soviets refused his idea, as OBSOLETE. Back in the early 60's!! The MIG 15 was stealth, relied on other methods. U.S towers couldn't detect it. Reason dog fights were the way to go and U.S had a reward to capture one. The U.S propaganda changed all to an EX CIA talking trash. His team , was suspended from work back then, he got MAD and began to talk all over radio. U.S INTEL picked it all. Those are the stealth of U.S NATO today. Back then Russia was at least 40 years ahead on Stealth tech. 1964!! But my guess is that the F35 will do what is supposed. But NOT all. As it will face tough competition.
cast235
2 December 2016, 18:35 GMT1
000000
Yes, to a layman like me, it will. But only to the United States mainly because all troubles created are in foreign lands so landing on a carrier vertically especially at night eliminated the danger away. But to a country that landing on a ship is not necessary is probably do ni much good, other than as an impression purposes
peaceactivist2
2 December 2016, 19:11 GMT1
000000
Newsfeed
0
New firstOld first
loader
LIVE
Заголовок открываемого материала
Access to the chat has been blocked for violating the rules . You will be able to participate again through:∞. If you do not agree with the blocking, please use the feedback form
The discussion is closed. You can participate in the discussion within 24 hours after the publication of the article.
To participate in the discussion
log in or register
loader
Chats
Заголовок открываемого материала
Worldwide
InternationalEnglishEnglishMundoEspañolSpanish
Europe
DeutschlandDeutschGermanFranceFrançaisFrenchΕλλάδαΕλληνικάGreekItaliaItalianoItalianČeská republikaČeštinaCzechPolskaPolskiPolishСрбиjаСрпскиSerbianLatvijaLatviešuLatvianLietuvaLietuviųLithuanianMoldovaMoldoveneascăMoldavianБеларусьБеларускiBelarusian
Transcaucasia
ԱրմենիաՀայերենArmenianАҧсныАҧсышәалаAbkhazХуссар ИрыстонИронауОssetianსაქართველოქართულიGeorgianAzərbaycanАzərbaycancaAzerbaijani
Middle East
Sputnik عربيArabicArabicTürkiyeTürkçeTurkishSputnik ایرانPersianPersianSputnik افغانستانDariDari
Central Asia
ҚазақстанҚазақ тіліKazakhКыргызстанКыргызчаKyrgyzOʻzbekistonЎзбекчаUzbekТоҷикистонТоҷикӣTajik
East & Southeast Asia
Việt NamTiếng ViệtVietnamese日本日本語Japanese俄罗斯卫星通讯社中文（简体）Chinese (simplified)俄罗斯卫星通讯社中文（繁体）Chinese (traditional)
South America
BrasilPortuguêsPortuguese
NewsfeedBreaking
08:56 GMTCIA Reportedly Warned US Military of Likely Presence of Children Near Afghan Drone Strike Target
08:56 GMTFrance, Russia Agree Modalities of Settling Champagne Import Controversy, Minister Says
08:28 GMTThere's No Unreleased Sex Tape of Kim Kardashian, Lawyers Say on Claims of 'Graphic & Better' Part 2
08:26 GMTMan Attacks Guards Over Refusal of Entry Without Health Pass in France, Reports Say
07:38 GMTAustralia Had 'Grave' Concerns Over French Submarine Capability, Prime Minister Says
07:33 GMTEight Dead, 7 Missing in China After Passenger Ship Capsizes
07:33 GMTBoris Johnson Slammed for 'Casual' Approach to National Security, 'Unclear Prioritisation of Risks'
07:16 GMTBritish Boxer Amir Khan 'Kicked Off' US Flight Over Row About Colleague's Face Mask
06:55 GMTAs US Prepares to Leave Iraq, Ex-Advisor to Iraqi President Says Kurds Need Reliable Partners
06:52 GMTTwo Women Arrested for Tearing Up Trump Signs and Snatching MAGA Hat From Child Escape Jail Time
06:46 GMT'F**k Joe Biden!' New Yorkers Take to Streets to Protest Vaccine Mandates, Link COVID Rules to Nazis
05:56 GMTAustralia May Rent or Buy Nuclear Subs From US, UK Until Its Own Fleet is Built Under AUKUS Deal
05:34 GMTColombia Condemns Maduro’s Participation in Celac Summit
05:14 GMTOver 50 London Police Officers Deployed to Oxford Street After Reports of Gunman - Video
04:30 GMTNot My Style: Adorable Golden Retriever Doesn't Like Wearing Shoes
04:26 GMTLive Updates: India Registers 30,773 New COVID-19 Cases
03:52 GMTMeghan Markle Wears Earrings Made of Same Diamonds That Decorate Her Mysterious Pinky Ring - Report
03:12 GMTIsraeli Security Forces Capture Last Two Fugitives Who Escaped From Gilboa Prison, IDF Says
03:10 GMTFrench Blindsided as AUKUS Details Were Discussed at G7 Summit Leaving Macron Out - Report
02:25 GMTBiden Administration Worried High-Level UN Meetings Will Become COVID-19 ‘Superspreader’ - Report