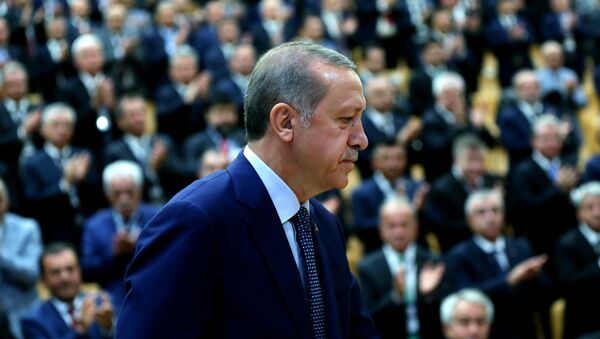 © AP Photo / Kayhan Ozer/Presidential Press Service
Subscribe
Turkey hopes that political and economic relations with Russia, Iran and China will be at the highest level as its relations with both the East and the West are complementary to each other, Turkish President Recep Tayyip Erdogan said Thursday.

ANKARA (Sputnik) — Erdogan said on November 20 that that the EU membership was not the only option for Turkey and that the country's leadership discussed possible accession to the Shanghai Cooperation Organization (SCO) with Russian President Vladimir Putin and Kazakhstan’s leader Nursultan Nazarbayev.

Ankara to Continue Policy on Syria Coinciding With Russia’s Stance

"Are Turkey’s ties with the West strong and are they weak with the East? Quite on the contrary. We would like to conduct political and economic relations with Russia, Iran, China at the highest level. These relations [with the East and the West] are not an alternative to each other. On the contrary, we perceive these relations as complementary," Erdogan said at his address to rural administrative authorities in Ankara.