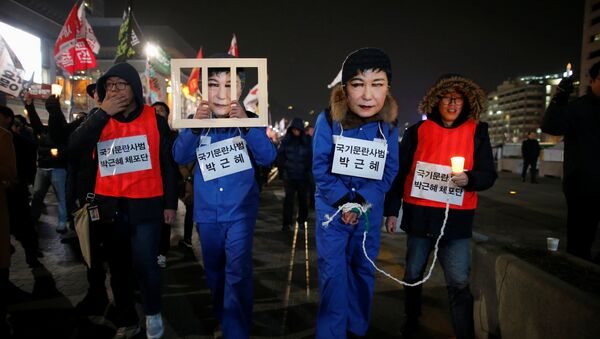 Over three-quarters of South Koreans support the impeachment of President Park Geun-hye amid the corruption scandal, a poll published Thursday showed.

TOKYO (Sputnik) — The poll conducted by the Real Meter survey organization showed that 75.3 percent of the respondents supported the motion, with 17.3 percent opposing it, according to the Yonhap news agency.

The survey was conducted after Park's speech confirming her readiness to resign this week with participation of 1,039 respondents with the maximum sample error standing at 3 percent, according to the media.

Political scandal around the president broke out when media reported that Park allowed Choi Soon-sil, her friend and "shadow adviser," who held no official post, to edit her speeches thus letting her influence the country's policy. Moreover, Choi was suspected of pressuring South Korean big corporations and extorting money from them for her noncommercial funds. A total of $70 million was transferred to the bank accounts of these funds.