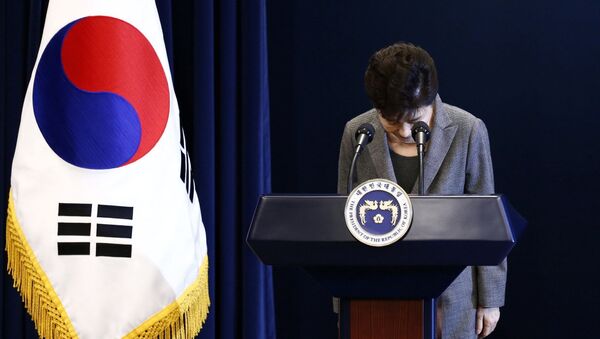 © REUTERS / Jeon Heon-Kyun/Pool
Subscribe
Voting on the impeachment of South Korea’s President Park Geun-hye is postponed due to the opposition lawmakers decision.

South Korea President to Skip Cabinet Meeting Amid Impeachment Threats
TOKYO (Sputnik) — The opposition lawmakers in the South Korean parliament decided to postpone the voting on the impeachment of South Korea’s President Park Geun-hye until the next week in order to hold additional round of negotiations with the ruling Saenuri Party to secure the desired outcome, local media reported Thursday citing a spokesman for the opposition People's Party.

"Our goal is to impeach Park, rather than the motion itself… As the non-Park members of Saenuri wish to continue discussions until next Wednesday, it is unlikely that the motion will be passed [on Friday]," Yong Ho Lee said as quoted by the Yonhap news agency.

The People's Party decision came after a group of lawmakers from the Saenuri Party seeking impeachment of President Park Geun-hye amid the ongoing corruption scandal reportedly backed down after Park expressed willingness to resign if the parliament suggested her convenient power transition procedure.

South Korean President Confirms Nuclear Test in North Korea
The impeachment of the South Korean president requires 200 out of 300 votes of lawmakers. The opposition consists of 172 lawmakers, which means that votes of at least 28 members of the Saenuri party are needed.

On October 24, media reported that Choi Soon-sil, a friend and "shadow adviser" of the president, allegedly received drafts of speeches and presidential documents, which could contain confidential information, though she had never held a public post. The revelation caused a massive anti-government protest in the country, with people calling on the president to step down.

Park is also suspected of involvement in raising funds for two nonprofit foundations dedicated to promotion of South Korean culture and sports, while president’s associate Choi is suspected of money misappropriation from these foundations. On November 20, the Seoul Central District Prosecutor's Office filed formal charges against Choi and two of Park's former aides and stated that Park was suspected of being an accomplice in the conspiracy.