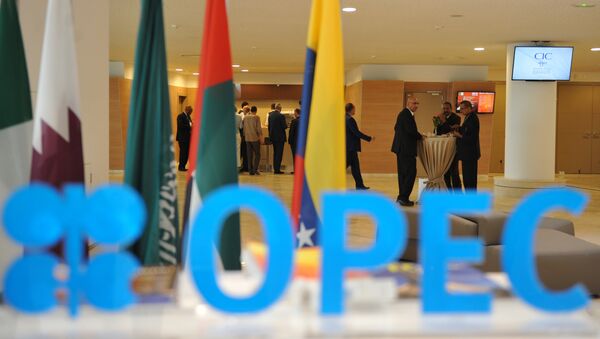 © AFP 2021 / Ryad Kramdi
Subscribe
The Organization of Petroleum Exporting Countries (OPEC) will likely fail to maintain its newly-agreed upon oil output ceiling, which will not have a lasting impact on the global economy anyway, former US Assistant Secretary for Fossil Energy Charles McConnell told Sputnik.

Oil Prices Growing by Over 9% Amid Results of OPEC Meeting
WASHINGTON (Sputnik) — On Wednesday, OPEC agreed to impose an oil production ceiling totaling 32.5 million barrels per day. Non-OPEC countries that expressed a desire to participate in the agreement, including Russia and Azerbaijan, are expected to curtail oil production by a total of 600,000 barrels daily.

"So it will be surprising to me if this decision remains constant for any long period of time," McConnell said. "I just don’t see it as a sustainable part of the world oil economy."

McConnell argued such a decision would have meant more in the past when OPEC dominated the global oil supply. He estimated that oil prices will likely hover between 50 and 60 dollars per barrel, barring any major disruptions, wars or transportation problems, which will benefit US energy companies.

If these prices can be sustained, McConnell claimed, US shale producers are currently positioned to fill any gaps in the global oil supply.

Earlier on Wednesday, Russian Energy Minister Alexander Novak said in a briefing that Moscow is willing to meet the oil production reduction targets and will gradually decrease output in the first half of 2017.