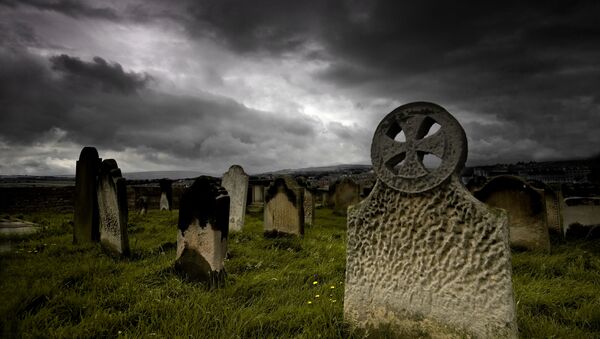 © Flickr / Gaz
Subscribe
Every year, some 60,000 residents of Los Angeles County die. The number is large because Los Angeles County is large; with roughly 10 million residents, the LA County is the US’s largest county and roughly twice the size of the next largest. Of those 60,000 who die annually, the bodies of between one and two thousand go unclaimed.

Unclaimed remains in LA County are the subject of a unique ritual, equal parts morbid and touching, as the bodies are interred in a mass grave in Boyle Heights. Those with no family to mourn them or no money for a private funeral are buried in the indigent grave, sometimes called a potter’s field or a pauper’s grave.

This has been the fate of 1,430 bodies in 2016 to date. Los Angeles County’s Office of Decedent Affairs typically holds remains for three years and, if they go unclaimed, the corpses are then cremated and buried in a mass grave. The deceased this year passed away in 2013, and as nobody has claimed their remains they will be cremated and buried together.

Those interred represent the vast array of humanity. Many are infants, struck down when they were most vulnerable. Others are elderly, left in a nursing home and forgotten by relatives, if there are any. Some are transients or undocumented immigrants with no one to identify them, others are homicide victims whose identities have never been confirmed.

On Thursday this year’s ceremony drew some 200 mourners, who covered the graves in teal sheets, flowers, glass chips and toys. There were prayers in all three major Abrahamic faiths, as well as Hindu and Buddhist chants, and readings from the works of the poet Maya Angelou. Some of the attendees are family to the deceased, possibly too poor to afford a private funeral or mortuary fees. Others simply feel that nobody should be buried without someone to mourn them.

The indigent grave is located in Evergreen Cemetery, which is privately owned. However, the crematorium belongs to Los Angeles County (as the entire potter’s field did until 1964) and they waive the cremation fee for impoverished families. Each mass grave is marked by a simple plaque reading the year.

Don Knabe, who has been a Los Angeles County Supervisor for twenty years, will be attending his final pauper’s funeral before retiring the next day, Friday, December 2. The Los Angeles Daily News reported a Tuesday statement in which Knabe remarked: “Some are homeless. Many are poor. Some have no families to grieve for them. Regardless of what their status in life was, each one of them mattered.”