Europeans Have Growing Desire to Abolish ‘Alienated Machine’ of EU 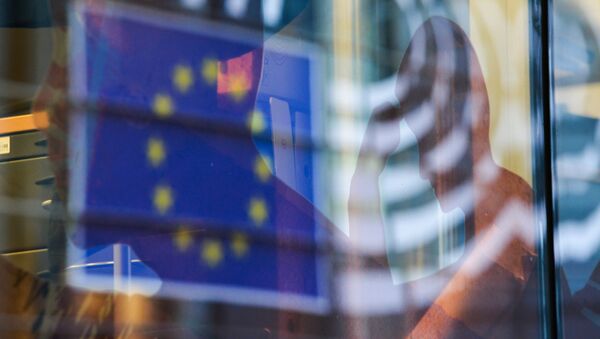 © Sputnik / Alexey Vitvitsky
/
Go to the mediabank
Subscribe
International
India
Africa
The number of Europeans who would want their countries to leave the European Union has dramatically increased, says a new Sputnik.Polls survey. European experts commented on the reasons why the number of Eurosceptics in EU has grown.

Brexit-Style Referendums Idea Gains Popularity in Three EU States After UK Vote
More than half (53%) of the respondents in Italy said they would like their government to hold a referendum on their membership in the European Union. 43% of respondents in France want their country to leave the euro-bloc, followed by Germany (43%), Spain (39%), and Poland (38%). The poll showed that after the United Kingdom decided to leave the EU in June, the number of people willing to follow suit had sharply increased by 5-10%.

European experts, whom Sputnik asked to comment on the possible reasons of this backlash against the EU in European countries, said that the gap between the EU political elite and its people has grown.

“International bureaucrats operating inside the Brussels machine from any European country have much more in common with each other than with the people of their own country. … They are completely divorced from the democratically expressed will of their electors,” Srdja Trifkovic, political analyst and foreign affairs editor for Chronicles magazine told Sputnik International.

Enric Ravello Barber, a Spanish Politician, expressed the same opinion in his interview to Sputnik Mundo: “I believe that the main reason is that citizens of the EU countries every day get new conformations of the incompetence of their political leaders who are busy with anything but those issues that concern common people.”

“EU officials are infinitely far from the problems of regular citizens. Austerity policy, imposed by Brussel, endangers the welfare of common people who can hardly make their living, while large corporations and banks prosper,” Argelio García, a political analyst from Spain, told Sputnik Mundo.

The experts also express their doubt that the European Union is able to cope with the migration crisis.

“They have no new tricks to offer. Faced with the migration tsunami they can either follow the ‘right,’ which is what the establishment politicians are trying to do in France, or else, they will continue repeating their old multicultural mantra, which is what Angela Markel is doing in Germany,” Trifkovic said.

“This is not so widely discussed, but the refugees are the most often suspects in criminal enterprises and this situation outrages people,” Barber said. He mentioned Hungary as a bright example of a country, where a referendum on refugees clearly expressed its citizen’s attitude to the policy of “open doors.” The same factor played a crucial role in Brexit, Barber assumed.

García added that the refugee crisis is not the only problem European media are silent about. “They have long turned into a propaganda tool in the hands of Brussels. Any alternative opinion is condemned immediately,” he said.

From this perspective, García estimated the European Parliament’s resolution against Russian media as an absolutely logical decision. “However, as we can see, such measures have an absolutely opposite effect. People are tired of the constant lies and disregard for their rights and interests,” he said.

Trifkovic mentioned that Brexit accelerated separation in the EU and new countries willing to hold a referendum of this kind could really follow in their footsteps. He believes it might be Austria if Norbert Hofer wins the presidential election later this week, and France, regardless of the outcome of the election.

“But the prime candidate could actually be Holland, because in Holland the gap between the ruling elite and the sentiments of the masses is probably wider in this moment than anywhere else,” Trifkovic concluded.

He expressed his doubts on EU’s capability to ever regain public support. “It is an alienated machine of unelected elite which exercises totalitarian control over its subject people,” the expert concluded.