In Aleppo, 'Russo-Syrian Alliance Has the Upper Hand, Will End Up Victorious' 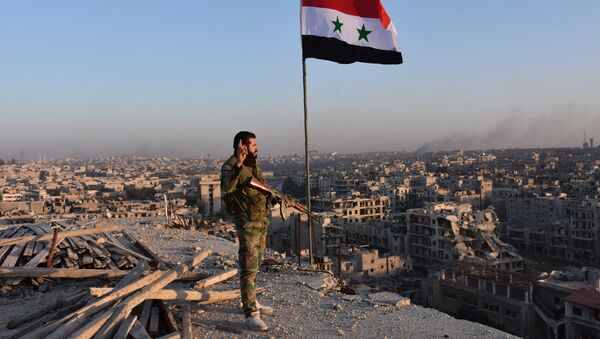 © AFP 2021 / GEORGE OURFALIAN
Subscribe
Ekaterina Blinova
All materialsWrite to the author
While the Syrian Arab Army is making progress in Aleppo it has become clear that the West has no real leverage to topple Syrian President Bashar al-Assad or implement a no-fly zone in Syria, Syrian political analyst Ghassan Kadi told Sputnik.

The Syrian Arab Army (SAA) has made considerable progress in liberating Aleppo from terrorists by capturing more than a third of the territory held by jihadists in the eastern part of the city.

Given the current state of affairs, Moscow hopes that the situation in Aleppo could be resolved by the end of 2016, Russian Deputy Foreign Minister Mikhail Bogdanov told RIA Novosti on Wednesday.

However, the West's media sources continue to turn a blind eye to terrorists' actions on the ground in Aleppo, and portray the SAA's operation as a "brutal campaign" which could be "one of the biggest massacres of civilian population since World War II."

"It was inevitable ever since the 'War on Syria' started that the battle of Aleppo was eventually going to be the make-it-or-break-it for either side to score the final and overwhelming win," Ghassan Kadi, a Syrian political analyst and expert on Middle Eastern affairs, told Sputnik.

"Realistically, the Syrian Army would have been unable to engage at the current level in Aleppo without Russia's help," he continued.

US, Turkey Military Operations in Syria Are Intervention
"With the on-going influx of fighters and munitions coming in from Turkey, it was like sealing a leaking dam with one's own hands. And even though Erdogan is not yet true to his promises of sealing the borders, the Russian intervention on one hand gave Syria the upper hand, and on the other hand, Erdogan is now possibly getting serious about fighting ISIS [Daesh] because he now realizes that he has to work with Russia, and the only way for him to be able to have some control on the final outcome of the negotiation with/about the Kurds is to first take ISIS [Daesh] out of the equation," the analyst elaborated.

Russia and Damascus have come under heavy criticism from the West for their Aleppo operation. What lies at the root of the West's discontent?

"The Western discontent stems from the fact that the chaos they have created is getting cleaned up. I am not at all a believer in the West's ability to successfully mastermind and execute plans. Their history speaks for it. Their history is a series of failures all the way from Korea to Libya. Perhaps they have learned to accept that they are unable to achieve any concrete positive outcome anywhere, and that they need to focus on and settle for second best; i.e. creating chaos that will hurt their enemies. And if someone steps in to replace the chaos with order, they will fight him tooth and nail," Kadi pointed out.

Russia Hopes Situation in Aleppo Resolved by Year-End - Deputy Foreign Minister
Meanwhile, the SAA and the Free Syrian Army backed by Turkey are taking efforts to liberate the Syrian city of al-Bab from Daesh from the southeast and southwest respectively.

Since August 24 Turkey has been conducting the Euphrates Shield operation in northern Syria.

In his recent interview with Sputnik Brig. Gen. Samir Suleiman, Head of the Media Affairs of the Syrian Army's Political Office, dubbed Washington and Ankara's actions in the region as "interference in [Syria's] internal affairs, aggression and intervention."

For his part, Zekeriya Abdulmecit, a representative of the Army of Revolutionaries, part of the Kurdish-led Syrian Democratic Forces (SDF), told Sputnik on Friday that Ankara is allegedly planning to build a military base in northern Syria on territory captured during the ongoing Euphrates Shield operation.

"At the end of the day, once all military hostilities cease, Turkey will have to withdraw its troops from Syria (and Iraq), and I have no doubt that this will happen, and this is why America is banking on keeping a de facto presence by attempting to create an independent Kurdish entity," Kadi emphasized.

"At the moment, in my view, whilst acknowledging that other analysts may disagree, I believe that apart from the Saudis and Qataris, all other parties agree that ISIS [Daesh] needs to be defeated; including the ones who are supporting it directly or indirectly," he stressed. 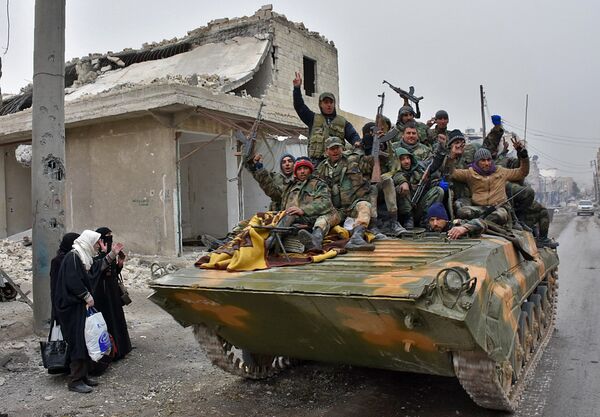 Syrian pro-government forces sit on a military vehicle driving past residents fleeing the eastern part of Aleppo and gathering in Masaken Hanano, a former rebel-held district which was retaken by the regime forces last week, on November 30, 2016.
© AFP 2021 / George OURFALIAN

However, since a final deal, as it were, has not yet been struck between those parties who disagree about everything else, each and every one of them is trying to gain as much mileage as possible, some from ISIS [Daesh] itself, before they sit together at the negotiating table. All of those parties know and acknowledge that the Russian-Syrian alliance has the upper hand and will end up victorious," the analyst emphasized.

Modern Day Knights: Who Are the Soldiers Fighting Terrorists in Aleppo (PHOTOS)
"The biggest losers will undoubtedly be Saudi Arabia and Qatar. They may not even send envoys to the negotiations under the guise of protest. This leaves primarily Turkey and the United States. This is why they are trying to establish as much foothold as possible so they can take a bargaining chip with them, and not particularly because they intend to stay within Syria. They may wish to be able to stay, but they know they cannot," Kadi told Sputnik.

The analyst underscored that it is becoming clear now that the days of calling for Assad to step down, for Western-backed interim governments to be formed, implementing no-fly-zones, sanctions, military action and so forth are over and done with.

"They have all been tabled on the agenda of the enemies of Syria, and neither one of them came to fruition," he remarked.

"For as long as the Syrian people continue to support President Assad, and they do, when President Assad eventually leaves his office, it will more than likely be a retirement, at a time of his choosing, and as a victor and he will be recorded in history as an unparalleled hero who stood up against all odds," the analyst concluded.