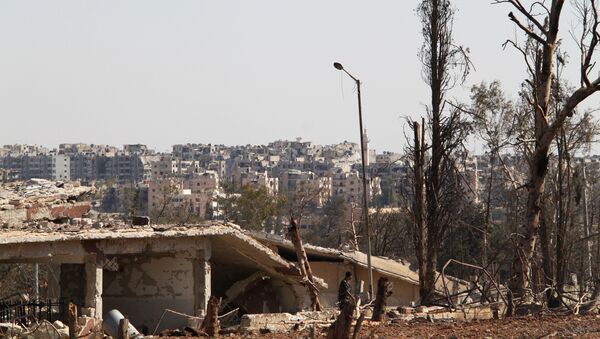 The delivery of the United Nations' humanitarian aid to eastern Aleppo is agreed with opposition and awaits only the permission from Syrian President Bashar Assad, the UK Foreign Office spokesperson told Sputnik on Wednesday.

Talks on Aid Delivery to Eastern Aleppo Underway – UNHCR
MOSCOW (Sputnik) — Earlier in the day, Russian Defense Ministry’s spokesman Maj. Gen. Igor Konashenkov said that he United States, the United Kingdom, France and the United Nations have not yet offered humanitarian relief to 90,000 Aleppo citizens, liberated from militants two days ago. He reminded about the previous US, UK, UN and French demands to provide humanitarian access to eastern Aleppo when it was held by the militants.

"The UN has a credible plan for meeting humanitarian needs in eastern Aleppo which opposition armed groups agreed to last week, all that is needed is a decision by the Assad regime to allow this aid in," the spokesperson said.

The situation in Aleppo has been seriously deteriorating over the recent months. Thousands of civilians are trapped in the terrorist-besieged eastern parts of Aleppo with no access to food or water. There have been several attempts to establish a ceasefire, however the bids have failed.

The Syrian civil war is ongoing since March 2011, with different countries, regional powers and terrorist organizations such as Daesh and Jabhat Fatah al Sham (previously known as al-Nusra Front) involved in the conflict.