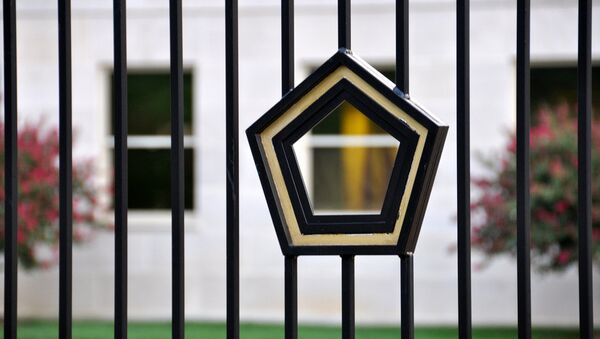 © Flickr / Kevin Harber
Subscribe
Russian Foreign Ministry spokeswoman Maria Zakharova commented on the situation in Syria, Ukraine's plans to hold missile firing drills near Crimea and Pentagon's decision not to jointly identify Daesh targets with Russia despite an "error" resulting in the deadly bombing of the Syrian army during her weekly press briefing.

Not So Pure After All: 'Black Deeds' of 'White Helmets' in Syria
Zakharova started by commenting on the situation in Aleppo and other areas in Syria.

Russia has repeatedly introduced humanitarian pauses in Aleppo to help civilians, Zakharova said, adding that militants use the truce to regroup and replenish arms and ammunition.

"We strongly believe that humanitarian issues should not become a tool for political pressure or serve as means of flirting with terrorists or shielding them."

She slammed White Helmets group over a MannequinChallenge video, showing an alleged rescue of a Syrian civilian. Zakharova reminded that White Helmets are nominated for the Nobel Peace Prize, while such footages are more suitable for Oscar.

The so-called Syrian Civil Defense group, the White Helmets, sparked online anger after the Revolutionary Forces of Syria Media Office (RFS) posted a video of them faking saving someone while doing the so-called "mannequin challenge," the viral video trend in which people are videoed while frozen in motion.

Trump to Confront Russia Despite Campaign Statements - UK Defense Secretary
Zakharova commented on a controversial statement by UK Defense Secretary Michael Fallon, who said that the US under President-elect Donald Trump should not hold an equal dialogue with Russia.

She said that it is inappropriate for any state to interfere in sovereign affairs of the US.

"We have to distinguish between electoral campaign rhetoric and what is done in practice. In fact, every US administration has always been in a confrontation with Russia. We do not say that there should not be any dialogue with Russia, but Russia could not be treated as an equal partner. Russia has obviously violated the international law by what it has done in Ukraine and Crimea and we will never forget this fact," Fallon said.

Erdogan Says Turkey's Op in Syria Aimed to 'Put an End to the Rule' of Assad
Zakharova was asked to comment on Turkish President Recep Tayyip Erdogan, who said that Turkey's operation in Syria is aimed to "put and end to the rule" of Syrian President Bashar Assad.

"What for? We do not lay claims to the Syrian lands… We are there to restore justice and put an end to the rule of cruel tyrant Assad," Erdogan said commenting on the Operation Euphrates Shield in Syria.

She said that Moscow is guided by Russia-Turkey agreements and official statements.

"In the context of the settlement of the Syrian crisis and bilateral relations with Turkey, we adhere to the agreements that we have reached at фт official level and directly with Turkish authorities."

Ankara signed the International Syria Support Group's Agreements that say that there is no military solution to the Syrian conflict, Zakharova said.

"We rely on the statements that have been made repeatedly by Ankara, including the leader of Turkey, and which formed the basis of the agreements signed by the country."

The Russian Foreign Ministry's spokeswoman said that Ukrainian plans to hold missile firing drills near Crimea are a "provocation."

"As for the so-called exercises with missile launches, it is another large-scale provocation by Ukrainian authorities that is aimed to escalate the conflict between Ukrainian and Russia," Zakharova said.

She did not rule out that "after Donald Trump's victory in the US election, Kiev wanted to keep the US as its main patron."

The missile drills are expected to take place on December 1-2 between 05:00 GMT and 17:00 GMT, Rosaviatsia said, adding that the launches will extend into Russia’s civil airspace and present a threat to flight safety.

On Wednesday, the Russian Transport Ministry said that Russian aviation authorities have informed the International Civil Aviation Organization (ICAO) of Ukraine's warning on introducing new restrictions for flights over the Black Sea near Crimea.

Zakharova said that "there is no logic" in Pentagon's decision not to identify Daesh targets of the US-led coalition in Syria despite an "unintentional, regrettable error" when US-led coalition aircraft mistakenly bombed the Syrian army instead of Daesh in Deir ez-Zor.

Pentagon Says No Plans to Identify Daesh Targets With Russia
On Tuesday, the Pentagon said that "in this incident, ultimately, we made an unintentional regrettable error primarily based on human factors in several areas in the targeting process."

However, the US Department of Defense said that Pentagon has no plans to work with Russia on the identification of Daesh targets.

On September 17, US-led coalition aircraft carried out four strikes against the Syrian army near the Deir ez-Zor airport, leaving 62 soldiers killed and some 100 wounded. The Pentagon said that the airstrike was a mistake and was intended to target Daesh militants, while a number of Syrian officials stated that the attack was intentional.

000000
Popular comments
Hope no BUM is interpreter.
cast235
30 November 2016, 12:01 GMT
000000
WOW HORRIBLE transmission. And I have super high speeds and a new computer with all to make it up to 4.1. When PUTIN'S translator will work for her? FIRE THOSE BUMS.
cast235
30 November 2016, 12:04 GMT
000000
Newsfeed
0
New firstOld first
loader
LIVE
Заголовок открываемого материала
Access to the chat has been blocked for violating the rules . You will be able to participate again through:∞. If you do not agree with the blocking, please use the feedback form
The discussion is closed. You can participate in the discussion within 24 hours after the publication of the article.
To participate in the discussion
log in or register
loader
Chats
Заголовок открываемого материала
Worldwide
InternationalEnglishEnglishMundoEspañolSpanish
Europe
DeutschlandDeutschGermanFranceFrançaisFrenchΕλλάδαΕλληνικάGreekItaliaItalianoItalianČeská republikaČeštinaCzechPolskaPolskiPolishСрбиjаСрпскиSerbianLatvijaLatviešuLatvianLietuvaLietuviųLithuanianMoldovaMoldoveneascăMoldavianБеларусьБеларускiBelarusian
Transcaucasia
ԱրմենիաՀայերենArmenianАҧсныАҧсышәалаAbkhazХуссар ИрыстонИронауОssetianსაქართველოქართულიGeorgianAzərbaycanАzərbaycancaAzerbaijani
Middle East
Sputnik عربيArabicArabicTürkiyeTürkçeTurkishSputnik ایرانPersianPersianSputnik افغانستانDariDari
Central Asia
ҚазақстанҚазақ тіліKazakhКыргызстанКыргызчаKyrgyzOʻzbekistonЎзбекчаUzbekТоҷикистонТоҷикӣTajik
East & Southeast Asia
Việt NamTiếng ViệtVietnamese日本日本語Japanese俄罗斯卫星通讯社中文（简体）Chinese (simplified)俄罗斯卫星通讯社中文（繁体）Chinese (traditional)
South America
BrasilPortuguêsPortuguese
NewsfeedBreaking
03:14 GMTPele Cheers Up Fans by Posting Video of Him Riding Exercycle in Hospital
03:07 GMTAxis of Resistance Killed US, Israeli Commanders in Revenge for Soleimani's Assassination - Report
02:56 GMTPolitical Capital & GOP in His ’Grip’: Trump ’Wants Back’ in 2024, Journos Say
01:43 GMTIRGC Chief: Iran No Longer Sees US as Threat - Report
01:18 GMTChinese Covid Vaccines Reach 100 Nations, But WHO Warns Africa Still Short 470 Million Shots in 2021
01:04 GMTAwkward Moment as White House Staff Cuts Off Biden-Johnson Meeting in Mid-Sentence
00:20 GMTVideo: Military Jet Intercepts Small Aircraft Over NYC in the Middle of UN General Assembly
00:19 GMTPark Ranger ‘Implored’ Gabby Petito to Distance Herself From Toxic Relationship With Brian Laundrie
YesterdayVideos: 6.0 Earthquake Strikes Southeastern Australia
YesterdayPro-Reunification Candidate Chang Ya-chung Edges Ahead as Chairman Election in Taiwan’s KMT Nears
YesterdayTexas Governor Vows to Prevent Del Rio Migrant Surge Disaster From Being Replicated
YesterdayUber’s Business Model Faces Threat After Legal Setback Across Europe
YesterdayUS Lawsuit Challenges Alliance of 2 Airlines for Stifling Competition
YesterdayTaliban Say No Al-Qaeda Members Present in Afghanistan
YesterdayJoe Biden Faces Backlash Over Inept UN Speech
YesterdayUS Democrats Strike Down $1Bln in Israel Defense Aid to Keep US Govt Running, Reports Say
YesterdayPope Jokes ‘Some People Wanted Him Dead’ While He Was Undergoing Surgery, Reports Say
YesterdayNo American Dream for Haitians
YesterdayBoris Johnson Contradicts Joe Biden With Claim of Intelligence That Taliban Could Take Kabul
YesterdayPelosi Accuses GOP of ‘Trying to Force First-Ever US Default’ by Opposing Limit Suspension Bill