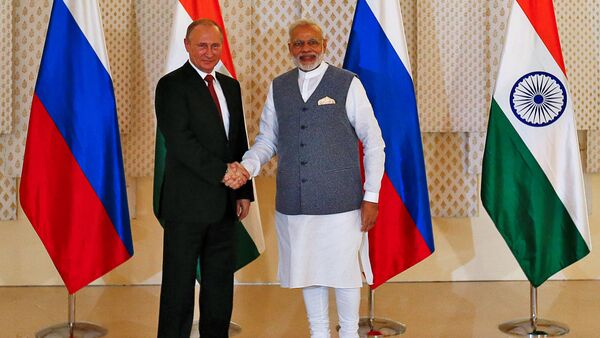 Bilateral trade between Russia and India has the potential to be improved in the near future, Russia's Ambassador to India Alexander Kadakin told Sputnik on Wednesday.

'India and Russia Are Closest Partners' - Russian Ambassador
NEW DELHI (Sputnik) — Bilateral trade between Russia and India remains weak and is a key area for the two countries to focus on improving in the near future, Russia's Ambassador to India Alexander Kadakin told Sputnik on Wednesday.

"We have to do much, much more in trade, that is our Achilles' heel. Because trade is lagging behind and we have to overcome maybe our laziness or our habit of getting everything ready. We have to find and search for new avenues to push our bilateral [trade] forward, that is the weakest point," Kadakin said.

Other fields of bilateral cooperation, such as nuclear and conventional energy, as well as defense, are currently at a high level, he added, stressing that Russia and India are close strategic partners with relations improving even further as shown by October's meeting between Russian President Vladimir Putin and Indian Prime Minister Narendra Modi.

During mid-October's BRICS summit in Goa, the two leaders agreed to conclude the joint construction of units 5 and 6 of India's Kudankulam nuclear power plant (NPP) before the end of the year, as well as signing a deal on a $1-billion fund to invest in India and agreeing on the supply of S-400 Triumf air defense systems and other defense equipment to India.

After the meeting, Putin expressed hope that Eurasian Economic Union (EAEU) member states' leaders would decide to start talks on creating a free trade zone with India in December.