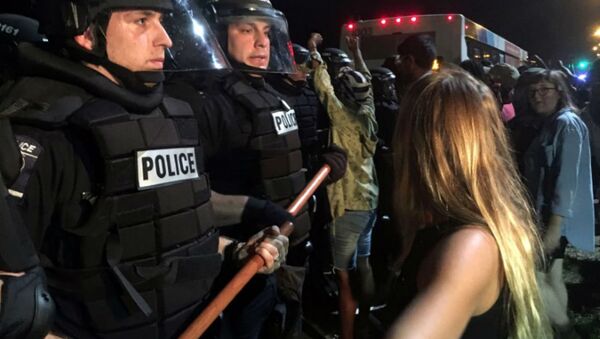 Vinson, who is also African-American, has been on administrative duty since the shooting and has only been with the department for two years.

The five officers present at Scott’s shooting claimed that he was armed during the incident, and while Scott’s family maintains that he did not have a weapon, Murray said that evidence indicated otherwise. The attorney reported that  surveillance video from a nearby store showed Scott exiting his vehicle with a gun his hand and disregarding at least ten police commands to drop the weapon.

The gun in question was stolen from nearby Gaston County over two weeks before the shooting, according to Murray, adding that Scott’s DNA was found on the weapon’s ammunition slide and grip, and that the safety was off with a bullet in the chamber.

After the shooting, one of Scott’s family members claimed on Facebook that Scott was holding a book instead of a gun, but the Charlotte Observer quotes Murray saying, "A reading book was not found in the front or back seats of Mr. Scott’s SUV."

At the news conference Murray  stated "It is my opinion that Officer Vinson acted lawfully when he shot Keith Scott," adding that the ruling was unanimously agreed upon by 15 prosecutors. Murray noted that he met with members of Scott’s family on Wednesday, saying they were "gracious".

The shooting exacerbated tensions between the Mecklenburg County Police Department and Charlotte’s African-American community, which finds itself not benefitting from the city’s rapid economic growth. Protests that followed saw demonstrators clashing with police, resulting in an officer being injured and at least one fatal shooting.

Department spokesman Keith Trietley said in a statement that plainclothes officers first arrived at Scott’s apartment at 4 pm in search of a suspect with an outstanding warrant when they spotted Scott in his SUV with marijuana and a gun. After the shooting he was pronounced dead at Carolinas Medical Center, his autopsy reports the cause of death as gunshot wounds to the abdomen and back.