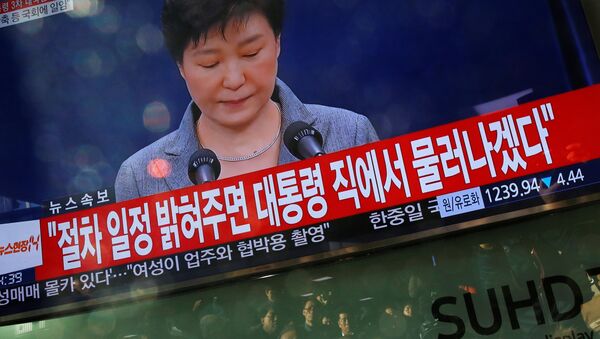 A group of lawmakers from the South Korean ruling Saenuri Party seeking impeachment of President Park Geun-hye amid the ongoing corruption scandal obtained the necessary amount of votes for the procedure, media reported Wednesday.

South Korean Opposition Expects to Vote on President's Impeachment on Friday
TOKYO (Sputnik) — The impeachment of the South Korean president requires 200 out of 300 votes of lawmakers. The opposition consists of 172 lawmakers, which means that votes of at least 28 members of the ruling Saenuri party are needed.

"We managed to gather the necessary number of votes [in the parliament] for the impeachment," the lawmakers said as quoted by the NHK broadcaster.

They added that the president should set the date of the resignation by herself, but the most appropriate time for it was the end of April.

On Tuesday, Park said in a speech that she was ready to resign if the parliament worked out a safe power transition procedure.

On October 24, media reported that Choi Soon-sil, a friend and "shadow adviser" of the president, allegedly received drafts of speeches and presidential documents,  which could contain confidential information, though she had never held a public post.

On November 20, the Seoul Central District Prosecutor's Office filed formal charges against Choi and two of Park's former aides and stated that Park was suspected of being an accomplice in the conspiracy. South Korea's main opposition Democratic Party (The Minjoo) has announced plans to seek vote on Park's impeachment in December.