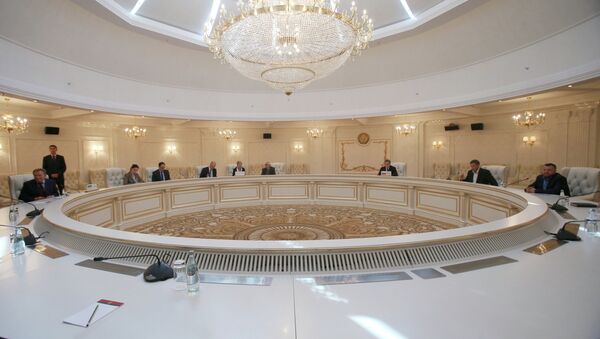 The “Normandy Four” will not be able to finalize the roadmap on ending the crisis in eastern Ukraine when they meet in Minsk on Tuesday, the head of the Center for Political Analyses in Moscow, Alexei Chesnakov, told RIA Novosti.

German and French foreign ministers Frank-Walter Steinmeier and Jean-Marc Ayrault earlier proposed holding the meeting in Minsk and OSCE representative in the Contact Group on Ukraine, Martin Sajdik, had also hoped to hold the meeting in the Belarusian capital.

Russia’s foreign minister Sergei Lavrov said that Moscow was ready to join in if all the other participants did the same.

“I don’t expect any breakthroughs, much less a final roadmap coming from Tuesday’s meeting in Minsk,” Chesnakov said.

He mentioned the widening rift between the representatives of the four nations on finding “realistic” ways to end the conflict in Donbass.

“The European negotiators started off by actively putting the issues of a political settlement on the back burner. Next, they, together with the Ukrainian representatives, insisted on all kinds of humanitarian and economic provisions to be added to the text of the roadmap,” Chasnakov said, adding that this had seriously complicated the work on the final document and the entire process of a peaceful solution to the conflict.

Russia Calls on Western Countries to Press Ukraine on Minsk Process Obligations
The roadmap was initially seen as a means of “synchronizing” priority security issues with political ones. The Ukrainian delegation then proposed adding new provisions to the roadmap in a clear bid to drag out the negotiating process.

Alexei Chesnakov accused the European participants of sidelining political issues while prioritizing humanitarian ones as a means of putting pressure on Russia and the self-proclaimed Donetsk and Lugansk People’s Republics.

“The authors of this proposal are driving themselves into a trap because neither Russia nor the Donbass republics will accept this. But even if they do, the Donetsk and Lugansk People’s Republics will most certainly make it conditional on lifting the economic blockade and repealing by the Ukrainian parliament of all laws banning trade between Ukraine and these two republics,” Alexei Chasnakov noted.

He described the European and Ukrainian insistence on including economic and humanitarian issues in the final draft of the roadmap as an attempt to draw out the negotiations.

“Well, they could draw up a separate document on economic and humanitarian issues, but these should not be mixed with political and security issues outlined in the final text of the peace roadmap. This would draw out the whole process and make any final agreement impossible,” Alexei Chesnakov said, adding that any further Ukrainian and European pressure to include humanitarian and economic issues in the roadmap would only mean that Russia and the Donetsk republics are the only ones interested in a long-lasting settlement of the conflict.

Belarus Ready to Swiftly Organize Normandy Format Meeting in Minsk
In February 2015, the Normandy Four leaders worked out a set of agreements in Minsk to ensure peace in Ukraine, later signed by the Kiev forces and the militias of the eastern Ukrainian Donbass region.

The Minsk deal stipulates constitutional reforms in Ukraine, as well as a ceasefire and weapons withdrawals. One of the key points of the peace deal is the decentralization of power in the country and granting special status to Lugansk and Donetsk. The reforms were to be concluded before the end of 2015.