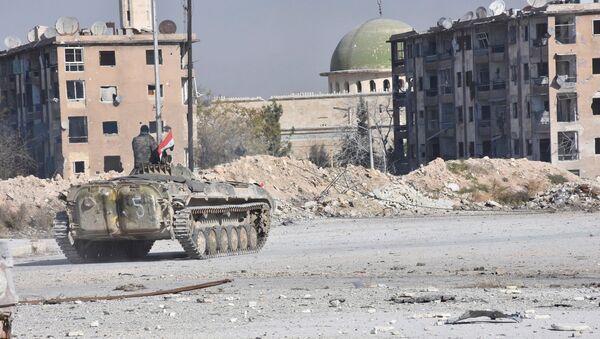 Kurdish Fighters Rescue Thousands of Civilians in Eastern Aleppo District
DAMASCUS (Sputnik) — According to Lebanon-based Al-Mayadeen news channel, the military forces discovered a mine-studded underground tunnel, leading to one of the churches located in a Christian quarter of Aleppo.

The total length of the tunnel was about 200 meters (0.12 miles), while the explosive device was placed directly underneath the church building. Tens of civilians could have been injured in case of a blast.

On Tuesday, the Russian Defense Ministry said that Syrian government forces had cleared almost half of Aleppo from militant strongholds, liberating some 80,000 residents.

The Syrian civil war is ongoing since March 2011, with different countries, regional powers and terrorist organizations such as Daesh and Jabhat Fatah al-Sham (previously known as al-Nusra Front), both outlawed in Russia, involved in the conflict.